The 4 tonne, 10 m long XMM-Newton spacecraft is the largest scientific satellite ever launched by the European Space Agency. Artist's impressions of XMM-Newton in orbit are shown below as a first overview of the satellite.

The XMM-Newton satellite is configured modularly and is composed of four main elements: 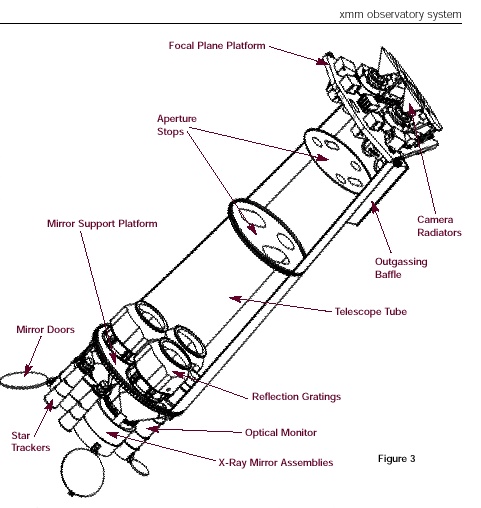 The different components of the XMM spacecraft and its payload are visible in sketches in which XMM has been "dissected", as shown in the following images.

The spacecraft structure, like any other structure, is there primarily to guarantee the integrity of the spacecraft under any loading, such as during handling, testing and launch. In addition, it must allow the spacecraft to serve as an optical bench for a telescope and therefore the structure must provide the necessary thermo-elastic stability in orbit. In the case of XMM-Newton, this led immediately to the selection of ultra-high-modulus carbon-fibre composites (low thermal expansion) for the main structural elements. Another advantage of this material is its very high modulus of elasticity, which limits structural mass for a structure like this, which is (also) designed for stiffness.

These two favourable qualities of this carbon-fibre material, plus its low mass, have led to its widespread use on XMM, albeit for different reasons in different parts. For instance, for the telescope tube and the mirror support platform, a carbon-fibre composite was necessary for thermo-elastic reasons. A strongly directional lay-up made it possible to meet the requirements, whereas the mass could be kept low. On the other hand, for the central cone of the Service Module, the stiffness required was the main reason for using a carbon-fibre composite.

In complex items, such as the mirror support platform, the joints that are necessarily made out of metal degraded the intended high thermo-elastic stability to such a level that active thermal control was necessary. Here, a carbon-fibre composite was selected for its high stiffness and strength. Other parts outside the optical path were made of aluminium for reasons of thermal conductivity (honeycomb for Service Module side panels), light-tightness and ease of production (telescope Sun shield, outgassing baffle).

The mirror shells of the Mirror Modules have to be kept at an average temperature of 20°C, with spatial maximum temperature differences of ±2°C in order to limit thermo-elastic deformations. Therefore, the platform is maintained almost isothermal, with deviations of less than ±2°C. On the other hand, the Service Module equipment presents quite standard temperature ranges and attention is therefore mainly paid to simplicity and reliability.

The thermal design of XMM takes the full advantage of the stable environment provided by its high-altitude, long-period orbit and by the limited variation of solar attitude angles (±20° pitch combined with ±20° roll). In fact, the Earth albedo and infrared heat fluxes are negligible along the largest part of its high-altitude orbit. Only at perigee passes, when the altitude reduces to 7000 km, XMM's thermal stability is slightly affected by the influence of the Earth.

The largest thermal perturbations occur during the eclipse seasons, when the satellite does not receive the Sun's energy for a maximum period of 1.7 h (although, on average, the eclipses are much shorter). However, eclipses always occur below the minimum altitude that is required for observation (40 000 km), leaving time for the spacecraft to recover its temperature stability. Boost heating performed before and after the eclipses by means of heater helps to reduce the time needed for recovery of the temperature drop caused by eclipses.

In order to cope with all orbital perturbations and with changes of satellite attitude, the telescope tube is completely insulated from the external environment and the heater power that is dissipated inside it can be almost continuosly adjusted to compensate for changes.