The Telescopes of XMM-Newton

Further information can be obtained from the XMM-Newton Users' Handbook 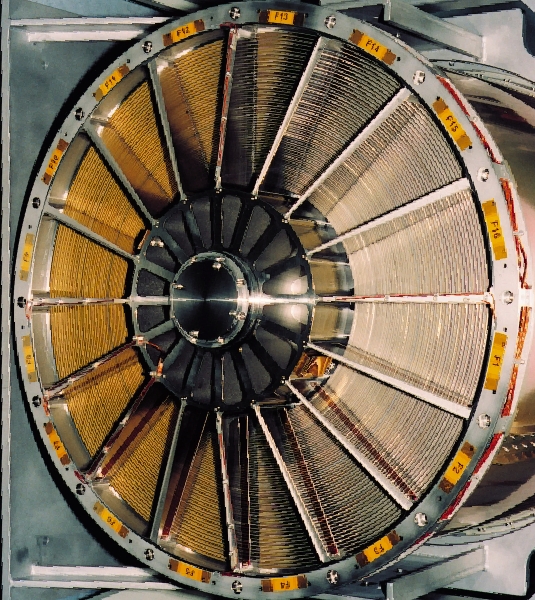 Each of the three X-ray telescopes on board XMM-Newton consists of 58 Wolter I grazing-incidence mirrors which are nested in a coaxial and cofocal configuration. The design of the optics was driven by the requirement of obtaining the highest possible effective area over a wide range of energies, with particular emphasis in the region around 7 keV. Thus, the mirror system had to utilize a very shallow grazing angle of 30' in order to provide sufficient reflectivity at high energies. The telescopes focal length is 7.5 meters and the diameter of the largest mirrors is 70 cm, to be compatible with the shroud of the launcher. Each telescope consists includes, apart from the mirror modules, baffles for visible and X-ray stray-light suppression and an electron deflector for diverting soft electrons. Two of the telescopes carry a Reflection Grating Array (RGA).

Each of the XMM-Newton telescopes consists of:

The 58 Wolter I mirrors of each telescope are bonded on their entrance aperture to the 16 spokes of a single spider made out of Inconel. The spider is connected to the support platform via an aluminium interface structure (the MIS: Mirror Interface Structure) consisting of an outer cylinder and an interface ring. On two of the modules, the ring interfaces the mirror module to a Reflection Grating Assembly (RGA). To minimise the mechanical deformation of the mirrors and therefore the optical degradation, the flatness of the interface between the spider and the MIS had to be better than 5 micron

X-ray baffles are located in front of the mirror systems. They act as collimators and reduce considerably the amount of straylight in the field of view of the focal plane cameras.

The XMM-Newton X-ray baffle was constructed as two sieve-plates made out of circular strips. The plates were mounted coaxial to and coaligned with the front aperture cross section of the 58 mirror shells, such that they block single-reflection rays, but do not eclipse two-reflection rays. Each sieve plate is a disk 1 mm thick with 59 circular strips and 16 radial spokes. The offset of the two sieve plates from the front of the mirror system is 385 mm and 439 mm, respectively. All the baffle surfaces facing the mirrors are blackened.

Each Mirror Module is a grazing-incidence Wolter I telescope, consisting of 58 gold-coated nested mirrors. Each mirror shell consists of a paraboloid and an associated hyperboloid which were replicated together in one piece to facilitate alignment and integration.

In grazing incidence optics the effective area is increased by nesting a number of mirrors and thus filling the front aperture as far as possible. The nesting efficiency is determined by the mirror shell thickness and, in case of very low grazing angles, by the minimum radial mirror separation which is required for integration and alignment. The thinner the mirror shells are and the narrower the shells are spaced, the larger is the collecting area.

The thickness of the smallest mirror (diameter=306 mm) is 0.47 mm, and it increases linearly with shell diameter in order to guarantee sufficient stiffness. The thickness of the 700 mm diameter mirror is 1.07 mm. The minimum radial separation between adjacent shells is 1mm. Adding more shells is rather inefficient in building up more collecting area because of the mass penalty involved and the low gain in effective area.

The performance of the X-ray telescopes can be characterized by:

The point spread functions and effective areas of the three telescopes were first characterized on-ground during an extensive calibration campaign. A comprehensive numerical model of the mirror system was used to generate an initial calibration database by extrapolating on-ground tests to in-orbit operation conditions and by interpolating between the finite number of measurement points. 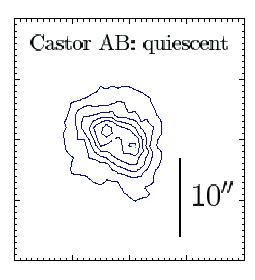 On January 19 2000 the X-ray telescope FM2 saw "First Light", followed by FM3 and FM4. After "First Light" a number of observations were made during the commissioning phase in order to characterize the imaging performance of the telescopes. Analysis of the results indicated that the telescopes point responses measured in-orbit were basically the same as derived from on-ground calibration measurements out to 30". In particular, extended sources in the center of the telescope field of view can be studied with a 5" spatial resolution.

For on-axis sources, high energy photons are focused predominantly by the inner shells of the telescope. These inner shells apparently give better focus that the average hence the fractional encircled energy increases with increasing photon energy.

The figure on the left displays the contours of the first X-ray image of Castor in which the two components of the binary system are spatially resolved. Both stars are separated by 3.9". The image was taken with MOS1 (from Gudel et al. 2001). 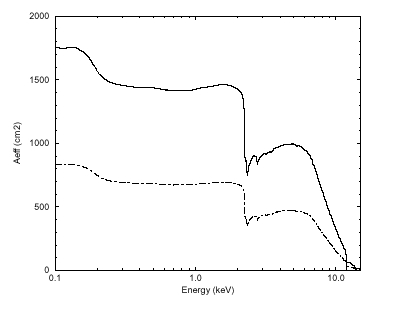 The effective area for each telescope was measured in the PANTER X-ray test facility illuminating the full aperture with line radiation between 0.28 and 10 keV, and using a copy of the ROSAT PSPC as focal plane detector. The figure shows the on-axis effective area of the XMM-Newton telescopes without (solid line) and with (dot-dashed line) RGA (from Jansen et al. 2001). 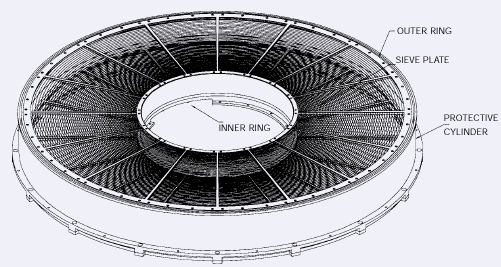 X-rays from outside the field of view can reach the sensitive area of the focal plane detectors by single reflection from the rear end of the hyperbola, if the source is at an off-axis angle between 20' and 80'. Rays reflected just once from any one the parabolas cannot leave the mirror assembly because of the close packing of the mirror shells.

The efficiency of the sieve plate system was ray traced and demonstrated to reduce the straylight level by a factor of 5 to 10 depending on the position in the focal plane. Pointings in the vicinity of the Crab Nebula confirmed the high efficiency of the baffles. The straylight collecting area of the EPIC detectors as a function of off-axis angle is about 3 cm2 for sources located between 20' and 1.4° from the optical axis, and completely negligible at higher angles.