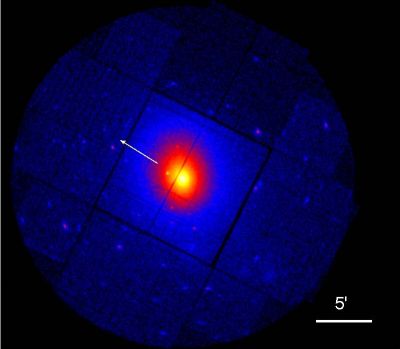 XMM-Newton was launched on December 10, 1999. Thanks to its ability to detect more X-ray sources than any previous satellite, XMM-Newton has helped solve many mysteries of the violent Universe, from what happens in and around black holes to the formation of cosmological structure in the early universe.

The good and surprising news is that more than 12 years after its launch, XMM-Newton keeps producing science as successfully as ever. 3000 papers based on XMM-Newton observations have been published already in refereed journals, and this figure keeps increasing at a steady rate.

"It is very surprising that [the production of XMM-Newton papers] stays so stable, about 300 papers per year", says Norbert Schartel, XMM-Newton Project Scientist. "No one could have foreseen this success".

It is not only the number of papers that grows. Also the community of XMM-Newton users stays very stable with around 1500 active scientists. XMM-Newton continues to attract around 400 new scientists per year, 120 of which appear as first authors in the published papers.

XMM-Newton observations have touched almost every field in astronomy, and they have definitely changed our view on many phenomena. As XMM-Newton SOC astronomer María Santos-Lleó wrote in Nature in 2010, "less than 50 years after the first detection of an extrasolar X-ray source, [ESA's XMM-Newton and NASA's Chandra] have achieved an increase in sensitivity comparable to going from naked-eye observations to the most powerful optical telescopes over the past 400 years."

If one has to choose among all the XMM-Newton discoveries, the one worth pointing out by level of attention -and citations- is the solution to the 'cooling flow' mystery in clusters of galaxies.

The study of these large structures, with diameters as large as 10 million light years and made of hundreds or in some cases even thousands of galaxies, is important to understand how the universe evolved. Astronomers knew that intergalactic space in the clusters of galaxies is full of hot gas -gas at millions of degrees-, and were convinced that this gas cools down when it approaches the centre of the cluster. XMM-Newton observations, however, did not support this view. The gas was still hot at the centre of the cluster. What was happening? Most likely, the supermassive black holes at the nucleus of the central galaxy can behave as a 'heating system' within the cluster. As Santos-Lleó et al. explained in Nature, "The cooling-flow debate took a dramatic turn" after XMM-Newton and Chandra observed the cores of a number of 'cooling flow' clusters.

The XMM-Newton paper 3000 addresses this problem indirectly. Titled High-resolution XMM-Newton Spectroscopy of the Cooling Flow Cluster A3112 and published in The Astrophysical Journal (2012, ApJ 747, 32), it focuses on galaxy cluster A3112, "whose properties make it an ideal target for studying heating models", say the authors (led by Bulbul, G. Esra, from the Harvard-Smithsonian Center for Astrophysics). They performed high resolution spectrometry of the central regions in the cluster, to determine the mechanical characteristics of the gas in addition to its thermo dynamical quantities . This kind of measurement can only be performed with XMM-Newton, and has been done for the first time less than two years ago by Sanders et al. (2010MNRAS.402L..11S).