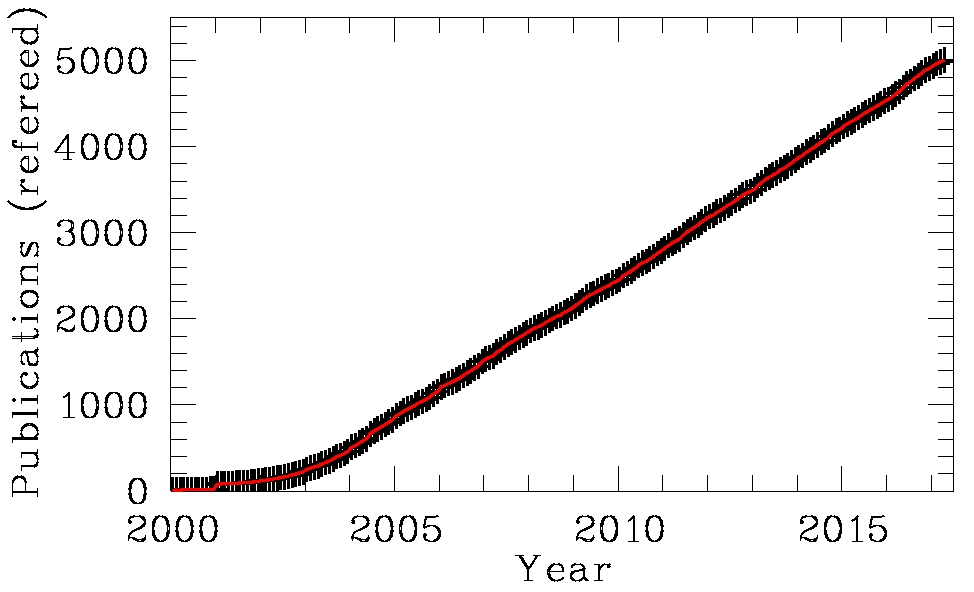 The XMM-Newton observatory has crossed a major milestone, to date having accumulated 5,000 science papers in the refereed literature.

This steadily growing number of publications includes papers which are based on XMM-Newton data, by either analysing observations or describing the spacecraft, its instruments and calibration.

After more than 17 years of measuring spectra and simultaneously taking images, XMM-Newton has established itself as one of the most prolific astronomical endeavours in ESA history. Based on data gathered through XMM-Newton observations, research studies describing discoveries in almost every field of astronomy have been produced. Of these, notably, over 50 have been published in the prestigious journals "Nature" and "Science".

The 5,000-plus papers have set new important constraints on dark matter and dark energy properties and provided new insights into the nature of objects like comets and planets of our solar system, young and hot stars, neutron stars, supernovae and their remnants, neutron stars and black holes, active galactic nuclei and clusters of galaxies.

Among the recent highlights are:

The human side of the project: the teams working to ensure ESA's X-ray observatory keeps on providing excellent science:

The Science Operations Centre (SOC) role is key for scientists:

Scientists using XMM-Newton can rely on well-established support provided by the SOC, at ESAC, near Madrid, Spain.

The range of support covers all aspects needed by the scientific community to exploit the data collected by the spacecraft. Any scientist wishing to request observing time with XMM-Newton can rely on the assistance of the SOC in the preparation of the observing proposal and in the optimisation of their accepted observations. The SOC, with continued support of the instrument PI teams and the Survey Science Centre (SSC), ensures that the data are calibrated, can be analysed with the specific Science Analysis System (SAS) and data of new observations are processed with a dedicated pipeline to generate scientifically useful products and to be distributed in a timely manner. Besides, all raw and processed data collected along the mission lifetime are made available in an easy and efficient way through the Science Archive. In addition, the SOC maintains a help desk service, web pages and documentation and organizes scientific workshops where new results are presented and discussed.

The SOC is also responsible for the scientific planning, i.e. the definition of the sequence of orbit-by-orbit spacecraft activities, including any fast reaction to unexpected events such as "Target of Opportunity" observations or spacecraft anomalies. In addition, the SOC also takes care of scientific payload operations, in particular nominal and contingency procedures, health and performance monitoring and instrument calibration.

Currently the SOC gives high emphasis to establishing heritage-type pipeline products, preparing the science analysis system to maximise its longevity, and homogenizing the calibration between the different instruments.

The Mission Operations Centre (MOC) role is key for the spacecraft:

The XMM-Newton satellite relies on the continuous supervision provided by the MOC, at ESOC, in Darmstadt, Germany.

The MOC operates the spacecraft from a dedicated control room. Mission operations include flight control, flight dynamics and ensuring the safe operation of the on-board systems. A network of ground stations allows continuous communication and interaction with the satellite over almost its entire 48-hour orbit around the Earth. Every command to the spacecraft is sent from the MOC, where also all data and health parameters come together from the different ground stations. Data collected by the spacecraft are transmitted to ground and processed in real-time allowing continuous monitoring of the systems and triggering immediate reaction to contingencies when necessary. In particular, during periods of intense high-energy particle flares, the MOC ensures the instruments are quickly protected to avoid any radiation damage.

Currently the MOC is preparing to merge a number of the monitoring and control activities with the Integral and Gaia spacecraft. At the same time it is developing a method to allow a longer lifetime for XMM-Newton. The objective is to move the on-board fuel from three of the tanks to a fourth one, the main tank - an activity built in to the spacecraft but never anticipated to need to be used and requiring to develop fully new procedures to support this. This technique is key for ensuring operations during the next decade.

In continuous round-the-clock interaction between the MOC and the SOC, the highest possible mission efficiency is ensured.

The external teams which have been extensively supporting science:

Throughout the years a number of teams, external to ESA, have been very important in supporting the SOC in executing its tasks, these are:

A bright future ahead for XMM-Newton

From the technical viewpoint the future of XMM-Newton looks very promising. Although the instruments are not getting any younger, the degradation experienced so far is quite moderate. Assuming adequate calibration support can continue, the predicted instrument performance will allow to continue the established research for the next decade or longer. The most important life-limiting factor is the fuel which, using conservative estimates, is predicted to end around 2029 and this might even open the possibility of a handover to Athena, the future ESA X-ray observatory.

The request for XMM-Newton observing time remains consistently high with an oversubscription factor of around 6. The response to the request of letters of intent for the newly established multi-year heritage programmes clearly indicates that there is no shortage of brilliant scientific ideas for continuing excellent observing programmes with XMM-Newton.