The images are centered at the IBAS position of GRB031203 and its reported uncertainty is marked by the dashed circle.
The re-measured positions of the sources listed in the circular GCN2474 are shown by the 10arcsec open circles. Sources S1 and S2 mentioned in GCN2464 are explicitly labelled.
As expected from the XMM-Newton pointing accuracy, the coordinates once the Attitude History has been reconstituted differ from the coordinates reported in previous circulars by 2-3arcsec.

A minimum event filtering has been selected to generate these images; a further image filtering has been applied to enhance weak sources. The overall higher background in the second observation significantly reduces the signal-to-noise ratio in most sources. 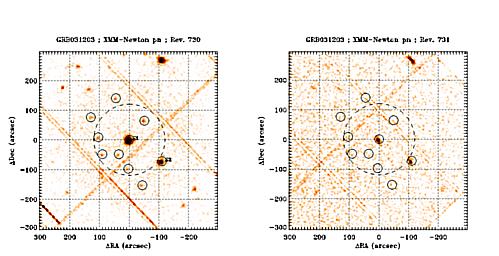 PN light curve of S1 between 0.3 and 7 keV (background subtracted). Already in the first observation the count rate decreased by ~40%. Due to the different observing modes, filter and off-axis angle, the comparison of the count rates in the first and second observations requires a further detailed analysis. However, all these effects may account for a decrease of a factor ~2 in the count rate but cannot explain by themselves the factor of ~8 observed. 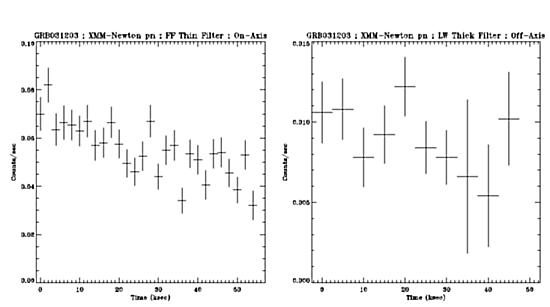 A single absorbed power law may not be enough to fully describe the X-ray spectrum of GRB031203; some structure seems to be present in the residuals of the fit to such a simple model. 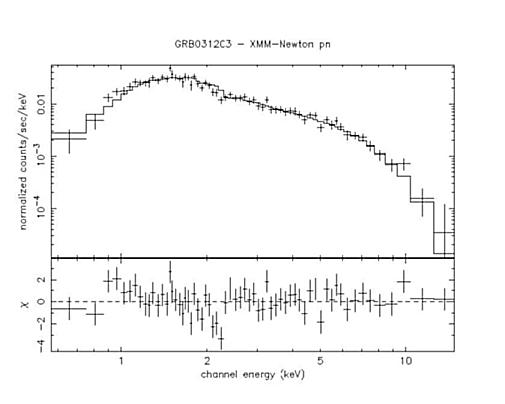