Galaxy clusters represent the place where astrophysics and cosmology meet. Recently, the most distant (z>~1.5), massive clusters were discovered in IR and X-ray surveys, and the first high-z clusters discovered through the Sunyaev-Zeldovich (SZ) effect were found thanks to the new telescopes SPT, Planck, ACT.   Massive (>~3.1014 Msun), high-redshift clusters are expected to be rare in the standard LCDM model. Therefore, robust mass measurements obtained from a combination of high-resolution X-ray and weak/strong lensing data are required to place stringent tests to the current cosmological paradigm. On the other hand, the underlying galaxy populations of these high-z clusters start to show signs of evolution relative to nearby systems, e.g. a reversal of star formation ("infrared Butchler-Oemler" effect). In this respect, the FIR Herschel data offers a new observational window, expected to provide valuable insights on their star-formation properties. Concurrently, significant progress had been done in the study of proto-clusters at z>1.6. A multi-wavelength approach is thus mandatory to gain a deeper understanding on the physical properties of these distant systems, obtain accurate mass measurements, and constrain the formation epoch of galaxy clusters.   The aim of this conference is to discuss the latest results in this field obtained with data at previously unexplored wavelengths, and investigate future prospects with upcoming facilities such as ALMA, E-ELT, etc.

Main topics to be covered:

- efficient techniques to search for high-z clusters (X-rays, SZ, NIR/optical,...)
- evolution of  galaxy populations in high-density environments in contrast with the field
- how is the build up of proto-clusters related to the peak of star-formation activity and black-hole accretion?
- what is the evolutionary sequence which led star formation to migrate from high-z overdensities to low density regions in the local Universe ? what was the role of feedback in this process ?
- properties of the most distant clusters and proto-clusters
- thermal and non-thermal emission from the (proto) cluster gas
- the impact of the most massive clusters on Cosmology

There will be no conference fee. 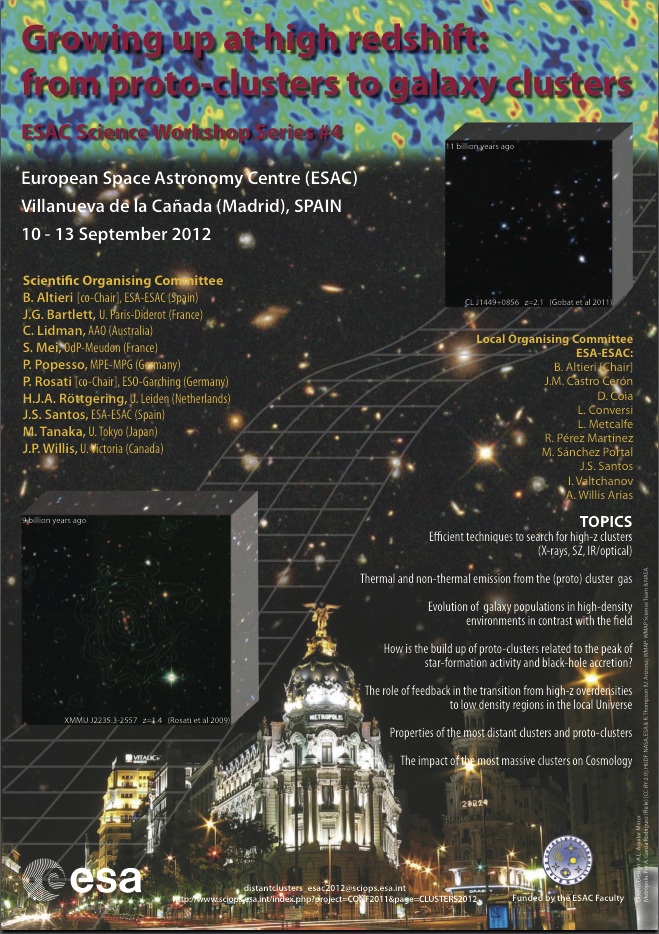