The next steps in the robotic exploration of the solar system involve missions to planets and satellites with significant atmospheres. The four giant planets Jupiter, Saturn, Uranus and Neptune have bottomless atmospheric oceans, whereas Mars, Venus and Saturn's moon Titan have solid accessible surfaces. The International Planetary Probe Workshop brings together scientists, spacecraft engineers, technologists, and mission designers interested in the technological challenges and scientific opportunities involved in entry, descent and flight in planetary atmospheres.

The Fifth International Planetary Probe Workshop (IPPW-5), to be held in Bordeaux, France, will build upon the accomplishments of four previous workshops - two held in Europe (Lisbon, Portugal, 2003  and Athens, Greece, 2005) and two in the USA (NASA Ames Research Center, 2004 and Pasadena, 2006).  As with previous workshops, key objectives include fostering international involvement and collaboration in probe exploration of planetary atmospheres, and engaging the next generation of scientists and engineers in this exciting field.

The fifth workshop will continue to focus on the science, technology, and mission design of probe missions to the Outer Planets and probe and aerial platform missions to Mars, Venus and Titan. There will be a session on technologies for the extreme environments experienced in entry, descent and flight at these targets.

A two day short course on "Controlled Entry and Descent into Planetary Atmospheres" will be held in Bordeaux on June 23-24.

The general goals of the International Planetary Probe Workshops are:

- To Review the state-of-the-art in science, mission design, engineering implementation and technology for the in situ robotic exploration of planets with atmospheres

- To Serve as a forum for initiating discussions on innovative methodologies and techniques for future missions to explore planets and satellites with atmospheres.

- To Involve young scientists and engineers in the field of entry, descent and flight in planetary atmospheres  in an opportunity to learn from experienced researchers and practitioners.

- To Foster international collaboration among the communities of scientists, engineers, and mission designers interested in planetary probes. 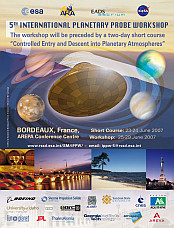