We study the alteration of the ices at the surface of the jovian icy moons (Europa, Ganymede, Callisto), resulting from plasma irradiation and dust bombardment.

The Jovian icy moons, from the left to the right, Europa, Ganymede and Callisto

The existence of icy moons around gas giants, located well beyond the ‘snow line’ of their host star, and able to maintain liquid water below an icy crust through the energy gained by tidal heating, is a tantalizing prospect for astrobiology. The important numbers of exoplanets of Jupiter size discovered so far and the ubiquity of water in the galaxy makes this type of habitat perhaps the most common one for the emergence of life.

The JUICE and Europa clipper mission will look in a complementary way for such habitats in the Jovian system. Without the existence of permanent plumes driven by cryo-volcanic activity that could be directly sampled from space, the clues for a subsurface ocean’s composition have to be found on the moon’s surface using remote sensing techniques.  Fortunately, it is well established that there is a transport of material between the ocean and the surface. Hence, deciphering the surface composition should provide constraints on the ocean’s composition.

However, things are not so easy in the Jovian system, because the icy surfaces are constantly altered, weathered by a variety of agents found in the Jovian system. The exogenic bombardment of the surface by energetic electrons and ions that populate the Jovian magnetosphere as well as micro-meteoroids, modify on a short time scale (compared to the moon’s evolution time scale) the surface ice composition and physical structure. Without a quantitative understanding of the effects of each weathering agent on the icy moon’s surface, deciphering the intrinsic composition of the moon’s surface, and hence, ocean composition, is impossible.

Our group collaborates with experimental facilities performing experiments on ices: university of Heidelberg (Germany), GeorgiaTech (US) and the CAB (Madrid, Spain). The laboratory work encompasses the irradiation, bombardment by micro-meteroroids and subsequent analysis of ices of controled composition, representative of the surface of the Jovian Icy Moons (University of Heidleberg and GeorgiaTech), as well as the measurements of di-electrical ice properties for future JUICE/Europa Clipper Radar applications (CAB). 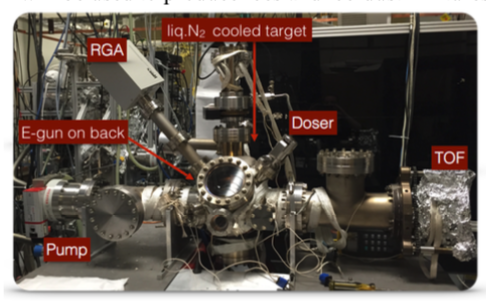 Current set up of the UHV-chamber at the Georgia Institute of Technology, EPICS lab, Orlando group

An important task of the group based at ESAC is to provide the experimental boundary conditions by simulating the characteristics of the space weathering agents (dust and energetic particles).

A series of tools is readily available at ESA to provide theoretical support to define the experimental requirements: micro-meteoroid environment models, for the interplanetary space (IMEM) and the Jovian environment (JMEM), have been built and delivered to ESA in the frame of two General Study Program (GSP) proposals (Dikarev et al. 2005, Liu et al. 2016). Dynamical simulations are performed to study the transport of dust grains of various sizes and origins across the Jovian system, to estimate their dynamical properties when impacting the surface of an icy moon. A set of data processing, analysis and mapping programs have been built at ESA for the archived Galileo/NIMS data by T. Cornet during his research fellowship at ESAC. Finally, the magnetospheric plasma environment modelling at the moons is supported by the JOSE software, originally designed as an engineering model for ESA to assess the radiation damages on the JUICE spacecraft.