The Mercury Surface Spectroscopy research group, or the MeSS, is searching the surface of Mercury using remote sensing instruments and laboratory measurements.

The closest planet to the Sun is full of mysteries, and the latest observations from the MESSENGER mission have revealed quite a number of surprises. The planet is "rich" in volatiles, volcanism is an important contribution to Mercury's history, water-ice is present in the northern hemisphere, and hollows might be the morphological expression of recent degassing on the surface of Mercury.

Through various on-going, and growing collaborations, we are open to explore all scientific interests related to the surface of the planet. All of our activities have important implication in the preparation of the BepiColombo observations, and we particularly ensure that our research benefit the planing of targeted observations on the surface.

As for now, we are very much focused on spectroscopy. We are using observations done by the MASCS instrument onboard the MESSENGER mission. From 300 to 1400nm, reflectance spectra from the surface are very useful to explore physical and chemical properties of the planet. The camera MDIS is also used, and is of good help to provide context to the point spectrometer.

So to speak, an instrument is not a science obejctive. This is entirely true, and we make use of the MASCS observations to understand various aspects of Mercury's surface

and much more that we are starting, or we have ideas about. Maybe you have suggestions, we will be happy to discuss them!

What is the core of our approach in the analysis of the data is to combine the scientific expertise with the technical expertise and infrastructure of ESAC. The MASCS data are imported in a relational database that allow scientists to rapidly search for relevant reflectance spectra. Shall your criteria be the location on the surface, the viewing geometry, the spectral parameters, the spatial resolution, the MeSS database will ease your search and provide to you the spectra you need.

We are currently data mining through more than 4.7 million spectra of MASCS. With such a high number of spectra, statistic is not longer an issue. 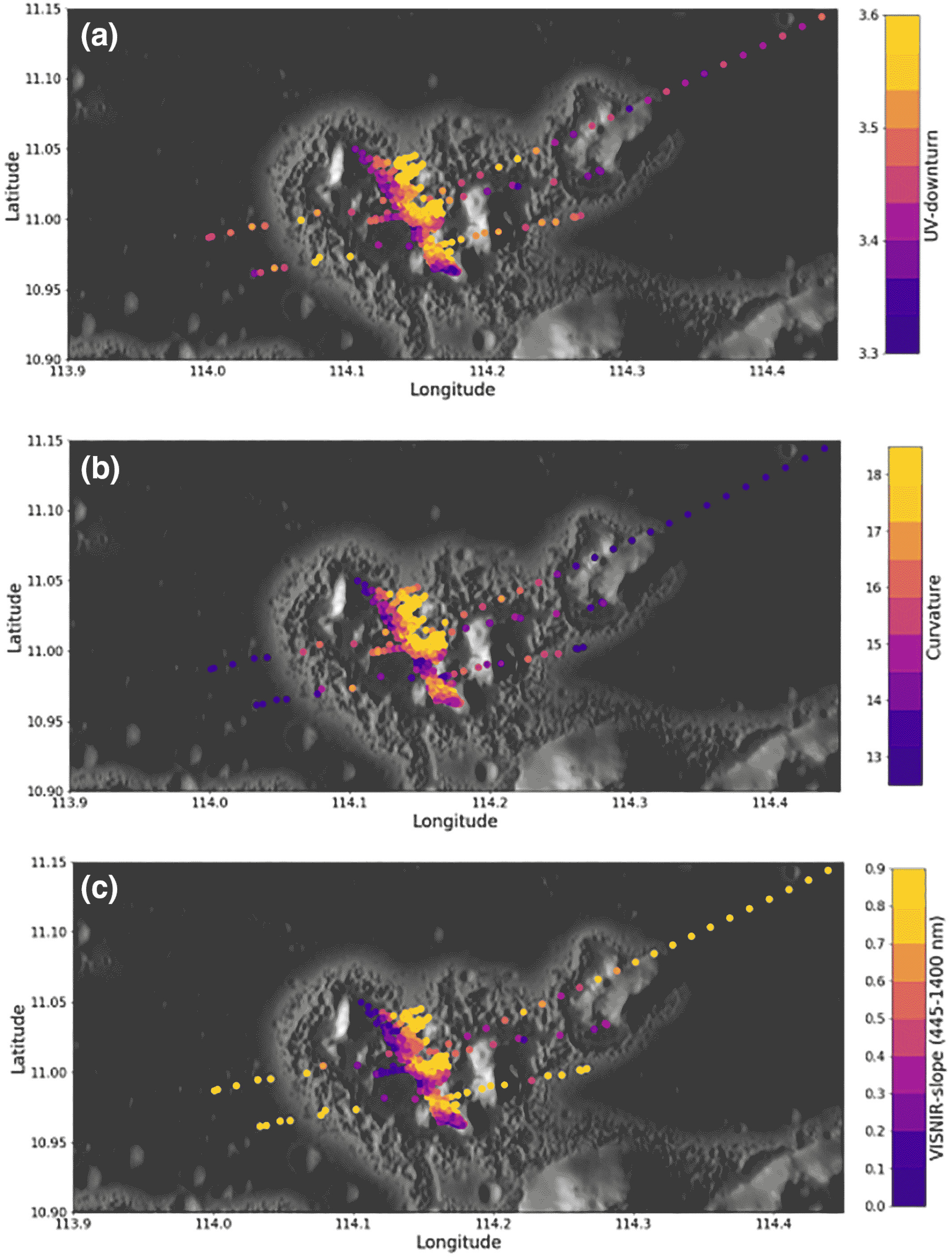 Example: Mercury Atmospheric and Surface Composition Spectrometer footprints in the Eminescu hollows (ob4_14327_010045, ob4_14326_164731). The spatial resolution is from 0.3 to 1.7 km/footprint, so the length of the footprint is approximately four times larger than the dot. The color code shows increasing values of UV-downturn (a), curvature (b), and VISNIR-slope (c) from blue to yellow. The three parameters gradually increase between hollow floor and bright halo (Barraud et al., 2021).

The core team is located at ESAC and is composed of Sebastien Besse, Claudio Munoz and Thomas Cornet.

Colleagues at ESTEC are also helping us with the scientific analyses, in particular Johannes Benkhoff, Joe Zender.

The project is activelly supported and done in cooperation with the Paris Science Lettres (PSL) university with Alain Doressoundiram and Oceane Barraud.

Our collegues from the DLR-Berlin are also very much involved in this initiative, in particular Jorn Helbert, Alessandro Maturilli, and Mario D'amore.

We also have an on-going collaboration with the Open University in the UK, Professor David Rothery and Jack Wright.

A local collaboration is progressing well with the Instituto Nacional de Técnica Aeroespacial (INTA) near madrid with Joana S. Oliveira.

We are currently initiating a collaboration with the University of Helsinki, Professor Karri Muinonen and Antti Penttilla.

We are also initiating a collaboration with the John Hopkins Applied Physics Laboratoy and Noam Izenberg.

The understanding of volcanic explosive episodes on the surface of Mercury has important implications for the origin, history and inventory of Mercury’s volatiles and for the thermal evolution of the planet. The hermean explosive features are pits, interpreted as endogenic pyroclastic vents often surrounded by bright and diffuse deposits, named faculae, and interpreted as pyroclastic material. We present a global spectroscopic survey of the surroundings of the listed endogenous pits, derived from spectra obtained by the Mercury Atmospheric and Surface Composition Spectrometer (MASCS/MESSENGER). The spectral properties of 26 faculae around endogenous pits were characterized. The diameter of 80% of them has been reassessed upwards by 17 km on average, implying volatile contents needed to emplace these deposits consequently higher than estimated in previous studies. These observations suggest a higher bulk volatile content or subsurface volatile enhancement. Spectral similarities between faculae located in the same crater indicate either a similar magmatic source or a large fraction of country rocks. The size, volatile content, location, and spectral properties of Nathair Facula seem to indicate an anomaly with respect to the other faculae that may be explained by a phreatomagmatic-like event by interaction between hot-magma and local carbon-rich layer.

(2021) Near-Ultraviolet to Near-Infrared Spectral Properties of Hollows on Mercury: Implications for Origin and Formation Process

Among the geological features revealed by the MESSENGER (MErcury Surface, Space ENvironment, GEochemistry and Ranging) mission on the surface of Mercury, hollows are the most surprising and least understood. Possibly related to volatile components, hollows are small depressions, surrounded by bright halos and are not observed on any other surfaces in our solar system. Previous analysis of multispectral data obtained by Mercury Dual Imaging System (MDIS) has shown that some hollows have weak spectral absorption features centered at around 600 nm. In this work, we analyzed four hollows with observations acquired by the Mercury Atmospheric and Surface Composition Spectrometer (MASCS) on board MESSENGER with more than 230 spectral channels from the near-ultraviolet to the near-infrared. Unlike previous MDIS multispectral data, the MASCS reflectance spectra exhibit no absorption features in the MDIS wavelength range. However, we found that hollows have unique spectral properties in the near-ultraviolet, with a spectral curvature between 300 and 600 nm that is distinctly different from other geological units. Moreover, we used MASCS observations with the best available spatial resolution (<0.5 km/pixel) to analyze both parts of a hollow: the flat floor and the surrounding halo. Our results support the hypothesis that hollows form by a sublimation process and scarp retreat.

(2021) On the asymmetry of Nathair Facula, Mercury

Nathair Facula is the largest and most spectrally distinct of nearly 200 ‘bright red’ spots (faculae) on Mercury's surface, most of which are accepted to be deposits from explosive volcanic eruptions. Like most of Mercury's faculae, it hosts a non-circular central pit (in this case nearly 40 km wide and 3 km deep). However, the center of this facula does not coincide with its central pit's midpoint. Quantitative analysis of two sets of spectral data shows that the facula's midpoint is offset by 10–30 km northwards or northeastwards, and probably lies outside the pit. The pit area is almost certainly a ‘compound vent’, within which the locus of eruption has migrated between eruptive episodes. The asymmetry of the facula and the texture of the vent floor are consistent with the most energetic and/or the most recent eruptions having occurred from the northeastern part of the compound vent, but evidence that the center point of the facula lies outside the vent indicates that it may be necessary to invoke an additional factor such as asymmetric eruption fountains.

(2020) Spectral Properties and Physical Extent of Pyroclastic Deposits on Mercury: Variability Within Selected Deposits and Implications for Explosive Volcanism

Explosive volcanism on the surface of planet Mercury is visible through the pyroclastic deposits that surround morphologic features often identified as the vent. Those deposits are known as faculae. The understanding of explosive volcanism provides important information on Mercury's geological, thermal, and volcanic history. Observations by the MESSENGER spacecraft are used to analyze in detail the spectral properties of 14 selected faculae with the aim of understanding their chemical and physical properties. Scientific observations obtained by the MASCS instrument are particularly suitable for this task, although their observational and geometrical constraints limit definitive conclusions. Nonetheless, spectral properties in the visible, ultraviolet and near-infrared indicate that the selected faculae are probably larger than visible in images solely. Spectral parameters provide a means to isolate Mercury's pyroclastic deposits with respect to Mercury's average spectral behavior. The similar spectral behavior of the visible, ultraviolet and near-infrared domains suggests that the amount of mixing of pyroclastic materials with the underlying material, the differences in grain sizes between and inside the faculae, and the presence of opaque/mineral phases, could play significant roles in the spectral properties observed. Observations by the BepiColombo mission in nadir configuration covering a large range of phase angles will be highly complementary to the MESSENGER observations.

Volcanism on Mercury has been indisputably identified at various locations on the surface, by means of both effusive and explosive volcanism. Its characterization is crucial to understand the evolution of the planet, in particular the thermal evolution of the mantle, and the volatile content of the planet. This analysis presents a detailed view of the pyroclastic deposits of the Caloris basin. Observations from the Mercury Atmospheric and Surface Composition Spectrometer (MASCS) are used to understand the spectral characteristics of the pyroclastic deposits, both in the visible and near-infrared. Additional calibration steps are proposed to reconcile the difference of absolute reflectance between the visible (VIS) and near-infrared (NIR) detectors. These calibration steps allow the use of the full spectral range of the MASCS instrument. Pyroclastic deposits exhibit a redder spectral slope in the VIS and NIR. This spectral slope diminishes toward the edge of the deposits to match that of Mercury's average surface. Spectral properties in the ultraviolet (UV) also change as a function of distance to the vent. Only the UV properties unambiguously separate the pyroclastic deposits from Mercury's average spectra. The spectral variations are consistent with a lower iron content of the pyroclastic deposits with respect to the average surface of Mercury, similar to what has been proposed for pyrolcastic deposits on the lunar surface. Nonetheless, given the limited illumination conditions diversity of the MASCS instrument, other causes such as grain size, space weathering, and bulk composition could also be accounted for the spectral variations. Variability of the pyroclastic deposits' properties within the entire basin are potentially identified between the three main clusters, and could be related to space weathering of deposits of different ages.