In 2021, the ESA Office at STScI announce the creation of a new lecture series: ESA Distinguished Lectures.

The series, to be held at STScI in Baltimore USA, aims at showcasing science from ESA missions, recognizing talented young European astronomers, and fostering collaborations in the broader international community.

Typically, each lecture will be accompanied by a two day visit to STScI, in which the Distinguished Lecturer will have the opportunity to meet with staff, students and postdocs. The lecture itself will be broadcast online for the widest possible visibility.

Professor Lendl specializes in the discovery and characterization of exoplanets through the use of high-precision photometry and low- to moderate-resolution spectroscopy. She is a science team associate on CHEOPS, the first ESA space telescope dedicated to exoplanets, and serves as the coordinator of the consortium atmospheric characterization working group. In her research she focuses on the detection of characterizable long-period planets from current surveys (NGTS, TESS) and the detectability of exo-Earths with the upcoming PLATO mission. 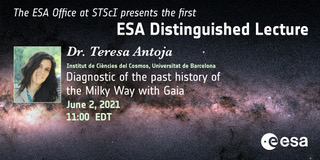 Dr. Teresa Antoja obtained her PhD from the Universitat de Barcelona in 2010. She was a postdoctoral researcher at the University of Groningen, with Prof. Amina Helmi, and then an ESA Research Fellow at ESTEC (2013-2016.) Dr. Teresa Antoja was then a Marie Curie Skłodowska Fellow at the Institut de Ciències del Cosmos at the Universitat de Barcelona, where she is now a tenured professor. Dr. Antoja works in Galactic Dynamics and Galaxy Formation. She is a member of the Gaia Data Processing and Analysis Consortium (DPAC) and has led or contributed to approximately 50 research publications using GAIA data. In addition to the GAIA DPAC, she is a consortium member for the state-of-the-art spectroscopic survey projects RAVE and WEAVE.

Dr. Antoja used GAIA DR2 data1,5 to study the phase space distribution of stars in the disk of the Milky Way, discovering a variety of new substructures with morphologies never observed before, such as snail shells and ridges. The nature of these new substructures implies that the disk is phase mixing from an out of equilibrium state, and that it is strongly affected by the Galactic bar and/or spiral structure. This result challenges the most basic premise in stellar dynamics of dynamical equilibrium, and shows that modelling the Galactic disk as a time-independent axisymmetric component is definitively incorrect. Dr. Antoja and collaborators infer that the disk was perturbed between 300 and 900 Myr ago, matching current estimations of the previous pericentric passage of the Sagittarius dwarf galaxy, which is in the process of merging with the Milky Way.

This discovery demonstrates that mergers with satellites have had a profound impact on the structure and dynamics of the Milky Way Galaxy. It also shows how GAIA reveals the signatures of such events in the positions and velocities of stars in the solar neighborhood with exquisite precision.

Dr. Antoja’s discovery paper (Nature 2018) has been referred to as “one of the most important discoveries to emerge from the ESA Gaia astrometric survey”2 and “a groundbreaking paper.”6