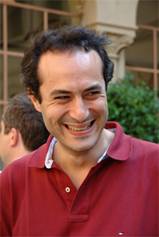 My personal research focuses on precision measurements and fundamental physics tests based on quantum sensors. It includes both experimental and theoretical studies on:

My core activity is represented by the ACES (Atomic Clock Ensemble in Space) mission, to which I am contributing as project scientist. ACES is developing high stability and accuracy clocks that will be deployed on-board the International Space Station (ISS). From there, the ACES clock signal will be compared to the best clocks on the ground to perform a precision measurement of the Einstein's gravitational time dilation and for Standard Model Extension tests.

In parallel, we are developing the next generation of atomic clocks based on the optical transition of Sr atoms. This clock is going to improve the stability and accuracy delivered by ACES by 1 to 2 orders of magnitude.

Finally, Space Quest is an experiment designed for the ISS to provide the first constraints on decoherence effects introduced by gravity on pairs of entangled photons.