Please find the latest issue of the Gaia Newsletter here.

The COVID-19 virus is spreading across the globe and its impact is also felt in the Gaia collaboration. The data processing effort is distributed over many European countries which adopt different approaches to fight the pandemic. In some countries, restrictions are very severe and the situation is rapidly changing towards more restrictions everywhere.

The schedule towards Gaia (E)DR3 is already affected and more delays can be anticipated. Those scientists and computer engineers in the Gaia Data Processing and Analysis Consortium (DPAC) who can work are now mostly working from home, but their priority is their own health and that of their families. Furthermore, resolving problems with computer hardware takes longer than usual due to the absence of personnel on operational sites.

Therefore, schedule delays of both Gaia Early DR3 and Gaia DR3 are inevitable, but can only be quantified after more clarity of the overall situation has been achieved. As soon as possible, a new schedule for the releases will be announced. While data processing has slowed down, the good news is that Gaia continues to collect valuable science data. With this note we wish everyone good health in the coming times.

Milky Way's warp caused by Galactic collision, Gaia suggests: Astronomers have pondered for years why our galaxy, the Milky Way, is warped. Data from ESA's star-mapping satellite Gaia suggest the distortion might be caused by an ongoing collision with another, smaller, galaxy, which sends ripples through the galactic disc like a rock thrown into water. Further reading here.

Due to a network downtime at ESAC, several Gaia DPAC services are affected: Gaia Jira, Gaia DPAC wiki and Gaia Helpdesk. Some other services may experience problems as well. We hope to get things up as soon as possible.

Please be reminded that the Gaia Archive will only be served using https starting on 1 February 2020, this in order to improve security. Requests to the old http access point will automatically be redirected. However, existing scripts may fail to be rerouted. For example, you may experience problems with old astroquery versions or hard coded URLs. Please update astroquery, or replace http by https in your code when needed. Some examples can be found in the GUI Help => Command line access. Please contact the Gaia Helpdesk if you still experience problems.

The Gaia DR2 primer has been updated to version 1.1. Apart from fixing some typos, some extra explanation is given on the TCB and links were added to the guide-to-scientists videos. Today's added known issue can also be found in the primer now.

Today we updated the Gaia DR2 known issues page with information on missing objects in the neighbourhood cross-match table with Gaia DR1 sources. This table contains the G-band magnitude difference, the angular distance, and an empirical metric combining both quantities (called “rank”), for all possible matches between Gaia DR1 and Gaia DR2 sources.

Please read through the new known issue carefully to see if it affects how you use Gaia data.

Selection of some interesting news from past years

Today the sampling of the Gaia scanning law over the 22 month time period covered by the Gaia Data Release 2, including the Ecliptic Pole Scanning at the begin of the mission, is made available from the Gaia Auxiliary Data webpage. Note that this is the commanded attitude of the spacecraft, the actual attitude could deviate from it by up to about 30 arcsec. Find more details here.

Below you can see a visualisation of how Gaia scanned the sky during its first 14 months of operations, so for the time period covered by Gaia Data Release1.

The Gaia Helpdesk is happy to announce the release of the Gaia DR2 primer "Everything you wish you had known before you started working with Gaia Data Release 2". This primer collects all information, tips and tricks, pitfalls, caveats, and recommendations relevant to Gaia’s second data release in one place and provides pointers to where more detailed information can be found. It is aimed at astronomers interested in using Gaia DR2 data, including undergraduates and PhD students. 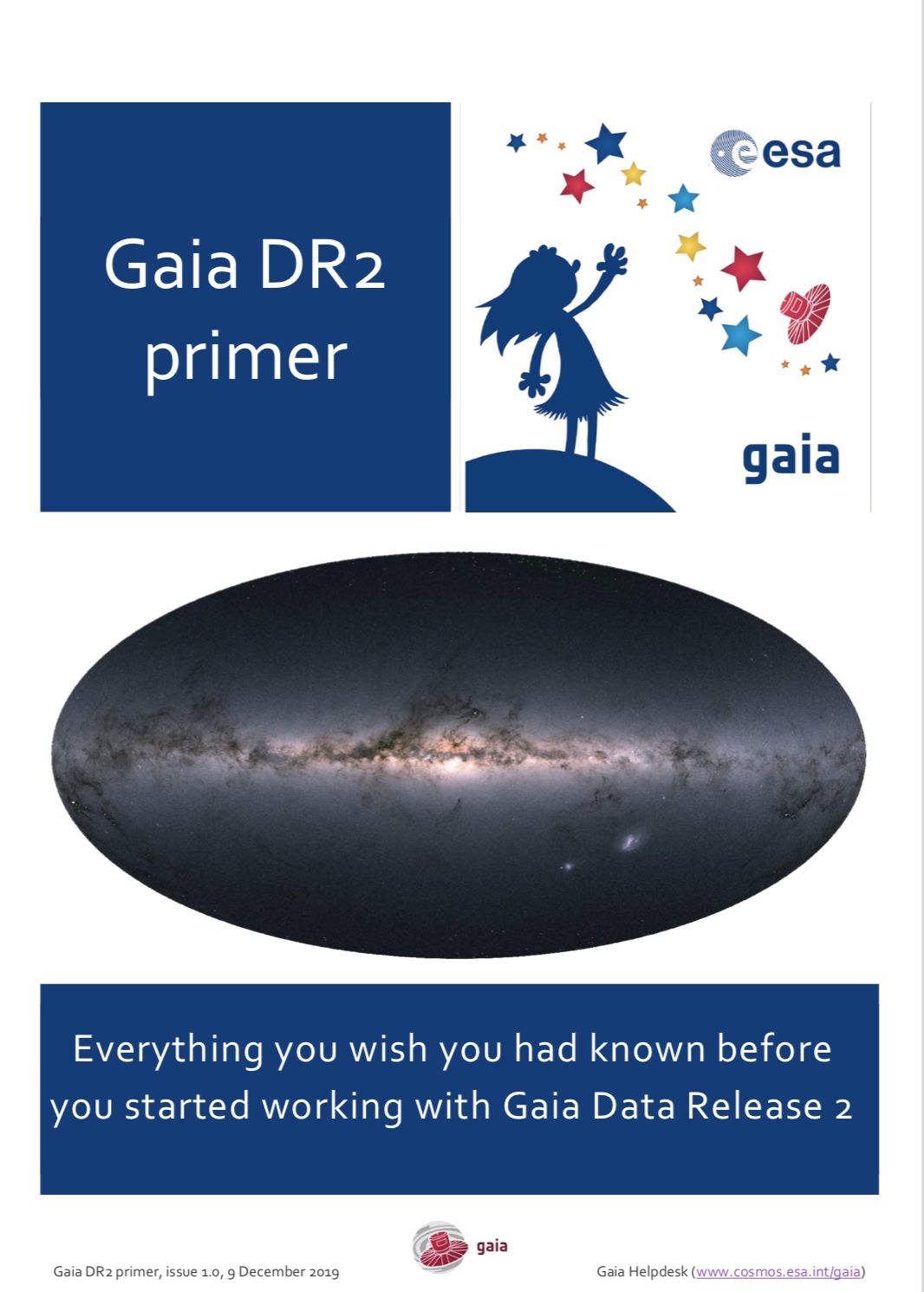 The Gaia Data Release 2 catalogues has been used extensively by astronomers across the world. About 3 to 4 papers appear per day based on the Gaia DR2 catalogue, touching many different topics.

Data processing toward Gaia (E)DR3 continues to progress within the announced schedule. However, to ensure sufficient quality of the quasars and extended objects results, an additional processing run has to be scheduled moving their outcome from Gaia EDR3 to Gaia DR3. Another modification concerns a new data product. A pencil beam survey with (integrated) epoch photometry of all sources (variable and non-variable) will be added to Gaia DR3. The selected field is centred on the Andromeda Galaxy. The cone with 5.5 degree radius contains in total about 1 million sources both in M31 and the Milky Way. In order not to impact the release schedule, only a limited amount of explicit validation will be done on the pencil beam epoch photometry.

Yesterday a major manoeuvre took place to ensure Gaia would keep out of Earth's shadow for the coming years. This manoeuvre, called the Whitehead Eclipse Avoidance Manoeuvre, also marks the transition of the Gaia mission into its first mission extension. Congratulations to the Gaia team at ESOC for the great achievement yesterday! 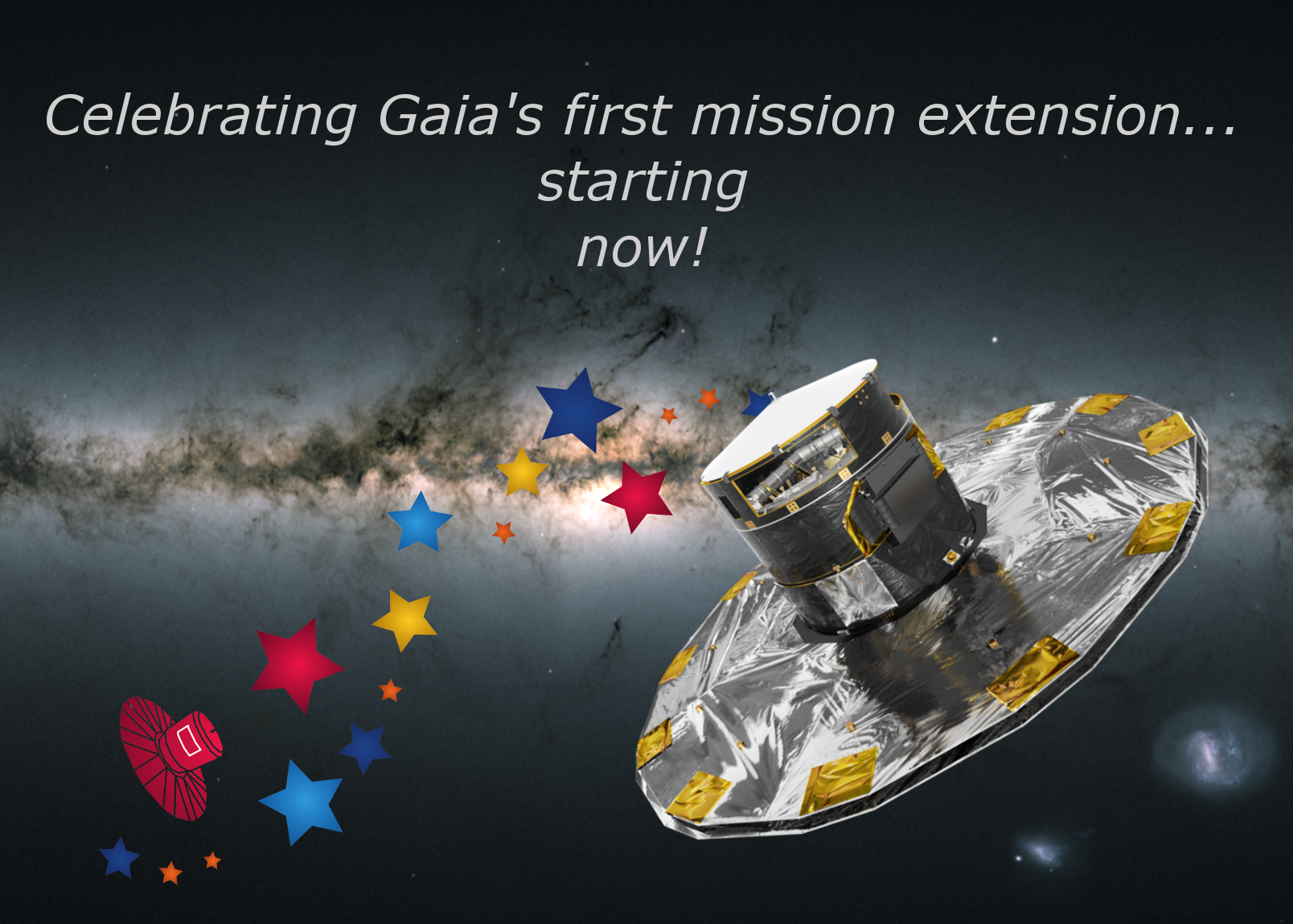 The NWO Spinoza Prize, which is the highest award in Dutch science, was awarded to several researchers working in the Netherlands who belong to the absolute top of science and have done groundbreaking research. Amina Helmi is one of the NWO Spinoza Laureates for her work on the Dynamics, Structure and Formation of the Milky Way at the Kapteyn Institute of the University of Groningen. She is part of Coordination Unit 9 in the Gaia Data Processing and Analysis Consortium and participates in the validation of the Gaia data.

The Lorenzoni Prize is an award instituted by the Societa' Astronomica Italiana (SAIt) with the sponsorship of "Officina Stellare" (an Italian manufacturing company in the field of design and construction of telescopes and precision opto-mechanical instrumentation for professional applications for scientific research, aerospace and defense) to reward the best scientific article published by a young researcher in the last 3 years.

This year the Lorenzoni Prize was won by Eloisa Poggio, a young researcher that has published the paper "The Galactic warp revealed by Gaia DR2 kinematics". This paper using Gaia DR2 data reveals that the warp of the Milky Way is a gravitationally induced phenomenon. She was awarded with her prize during the SAIt national meeting that was held in Rome on 16 May 2019.

Today marks the first birthday of our Gaia Data Release 2, a data release that truly changed our view of the Milky Way. We'd like to celebrate this day with a special thank you to all the people involved in all stages of Gaia's life: from initial proposal, to gathering interest, to design and building and actual operating of the spacecraft. From getting the data down, checking the health of the data, to processing the raw data into a scientifically usable format and then validating to make sure the data is truly that great! 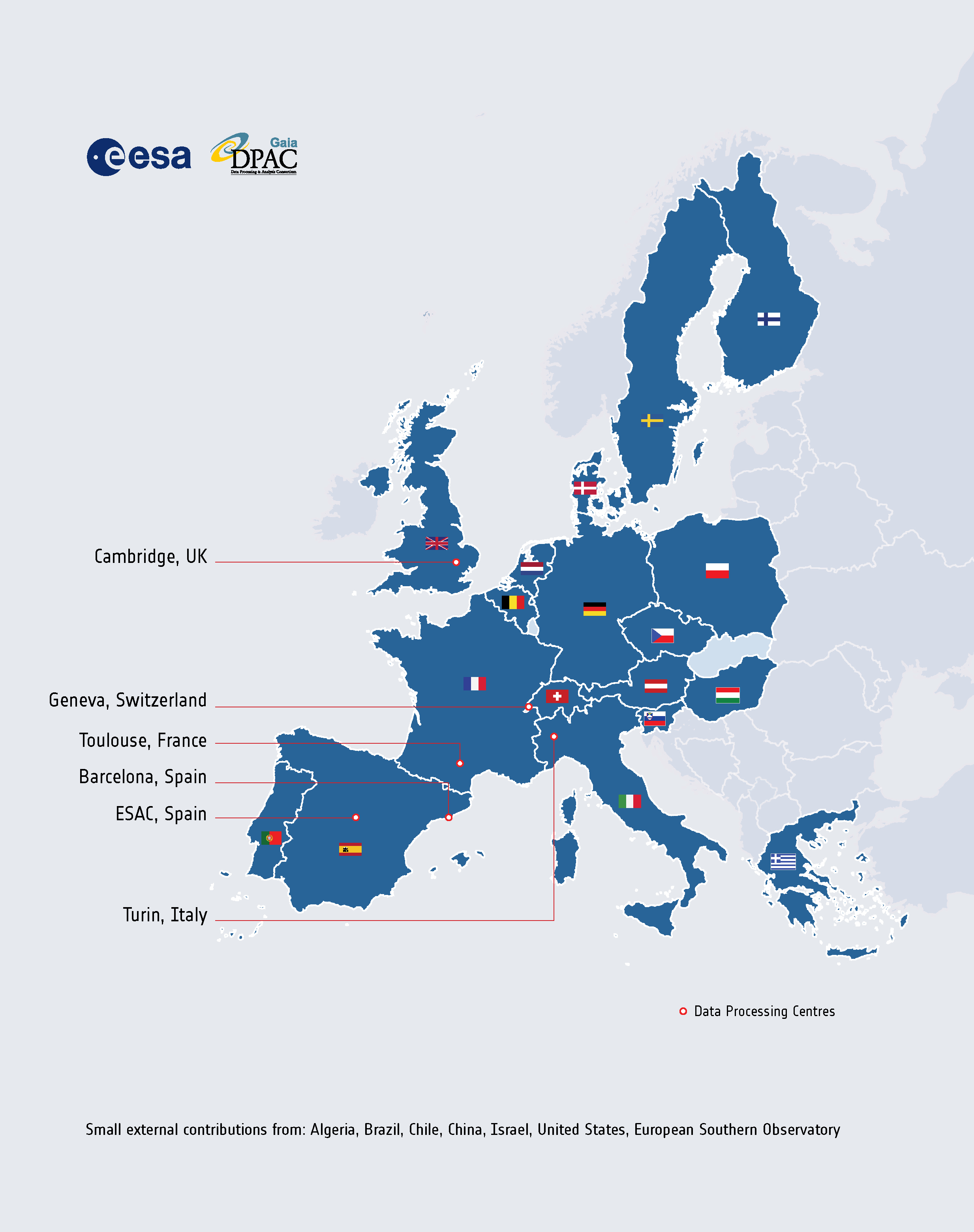 In the image released today you can see the geographic contributions to the Gaia Data Processing and Analysis Consortium. It shows the countries where the people in DPAC are working. Read further on Gaia DPAC and its contribution to Gaia Data Release 2 in our newest story available here.

From 8-12 April 2019, the 53rd ESLAB symposium took place at ESTEC, The Netherlands. A summary of the results shown at the symposium can be found here. 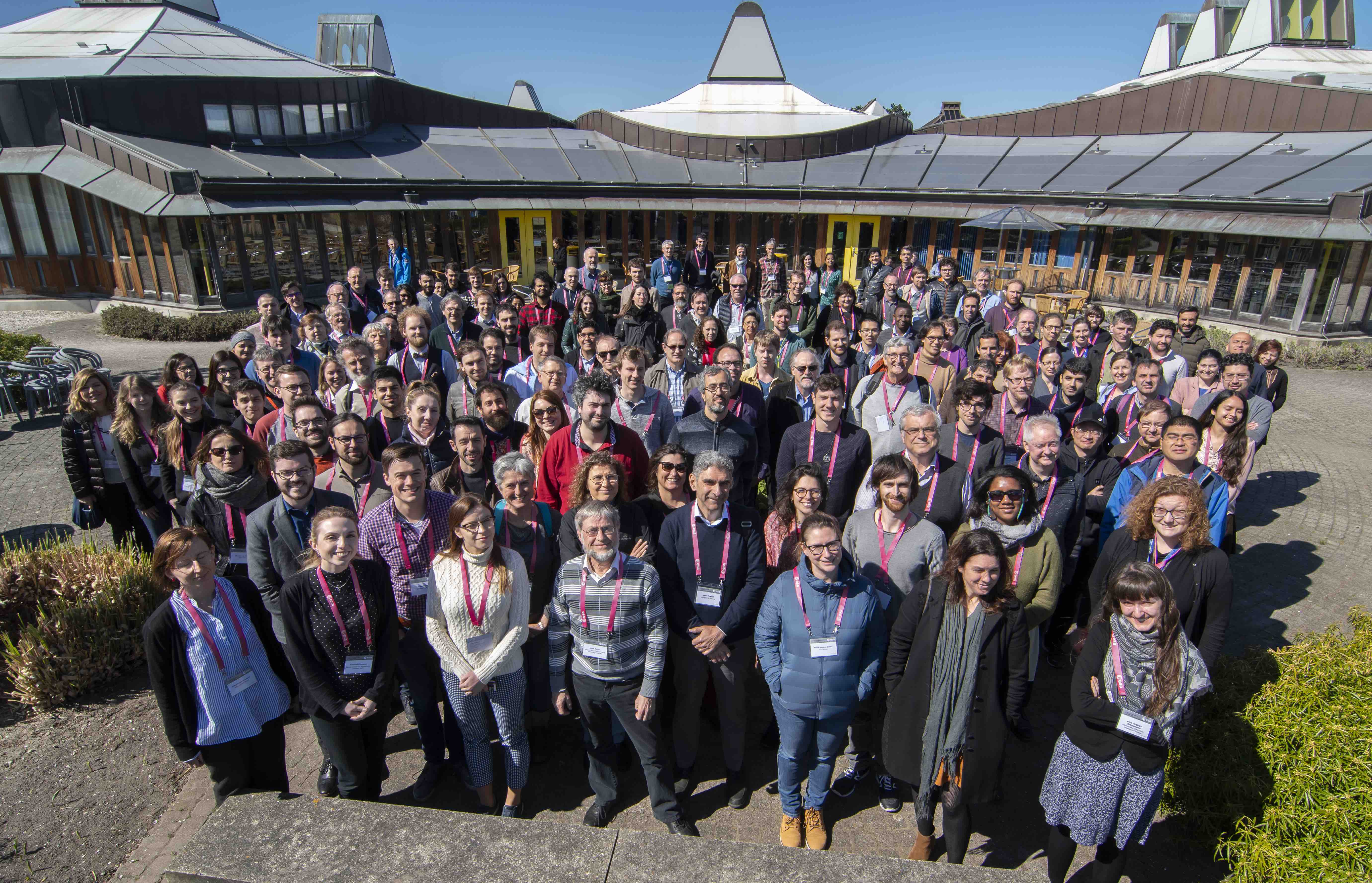 07/04/2019 Rethinking everything we know about star clusters

Recently an overview article appeared on ESA Science & Technology discussing the role of Gaia in our knowledge of star clusters. By studying stellar clusters, Gaia reveals much about the formation and evolution of stars in our surroundings. Read the full article here.

Today on ArXiv a paper appeared by Boubert et al.  describing potential contamination of radial velocities in crowded regions. A summary has been added to our Gaia DR2 Known Issues page, along with links to the paper and the accompanying data. The page also describes other topics like astrometry and crossmatches, and complements the Gaia DR2 data release documentation.

The Gaia data processing toward Gaia DR3 is progressing at full speed. Although the schedule has stabilised, there are several uncertainties as many elements of the pipelines will see the real data in an operational environment for the first time. Taking the uncertainties into account brought the schedule of the next release toward the end of the earlier announced period of the first half of 2021.

To mitigate the impact on research, the Gaia DR3 will be split into two releases. This way, data that is ready earlier, will be released earlier. The early release, Gaia EDR3, contains astrometry and (integrated) photometry i.e. positions, parallaxes, proper motions, G-band fluxes as well as integrated red- (RP) and blue-band (BP) fluxes, all based on 34 months of data resulting in better accuracy with respect to Gaia DR2. First results for a predefined list of quasars and extended objects may also be included already in the early release. Gaia EDR3 will take place in Q3 of 2020.

Gaia DR3, which is anticipated to take place during the second half of 2021, will supersede Gaia EDR3. This means that the source list and any data published in Gaia EDR3 will not change, but is simply copied to Gaia DR3. Therefore Gaia DR3 is based on the same 34 months of mission data as for Gaia EDR3. The additional products include:
- radial velocities (significantly more due to fainter magnitude limit),
- BP/RP/RVS spectra (new products),
- Solar system data (significantly more sources included),
- variability information (significantly more objects due to longer time interval),
- results for non-single stars (new products), and
- astrophysical parameters (based on spectra).
The final inclusion of the products into Gaia DR3, as well as Gaia EDR3, is subject to successful validation.