Gaia Image of the Week - Gaia

Gaia reaches to the clouds – 3D kinematics of the LMC

With Gaia's Early Data Release 3 the structure and properties of the Magellanic Clouds were highlighted by the Gaia Collaboration, X. Luri, et al. A&A 2020. The paper demonstrates the quality of the Gaia data and a story discussing these results was published. Now, with the release of almost 34 million line-of-sight velocities with Gaia's full Data Release 3, the investigation continues, and for the first time, a homogeneous data set with 3D velocity information is available for a galaxy that is not our own Milky Way. For the first time, we can truly map the Large Magellanic Cloud (LMC) kinematically.

The Magellanic Clouds are two dwarf galaxies orbiting our Milky Way. Being immersed in our own galaxy, there are so many stars to see (especially near the Galactic Centre) that we cannot probe very far in the optical. This makes it hard to see the full picture and to study our own galaxy as a whole. With the Magellanic Clouds relatively nearby and the ability of Gaia to map stars across the full extent of these galaxies, they are excellent study objects on the structure and dynamics of galaxies. It is amazing to think that Gaia can not only see the individual stars in these dwarf galaxies but can also track their motions in three dimensions.

When Gaia looks at the stars in the Magellanic Clouds, it looks through a cloud of stars in the Milky Way. To distinguish which stars belong to the Milky Way and which stars are part of these dwarf galaxies is not trivial. The team from the University of Barcelona made use of a neural network and presented their improved and more efficient selection strategy in their paper "Kinematic analysis of the Large Magellanic Cloud using Gaia DR3" which has been published in A&A this January. The result is a more confident sample of stars believed to be all inside the Large Magellanic Cloud. But even with this better and more reliable method some contamination of Milky Way stars cannot be avoided.

When making the selection for the stars belonging to the Large Magellanic Cloud, a choice has to be made whether to aim for a pure data set (containing stars that one is really sure that they are part of the LMC with the risk of losing some stars that might be members as well) or to aim for a complete data set (containing all stars we think might be members, with the risk of having some members that after all do not belong in the LMC). The solution shown here in the story is the optimal solution found by the team, which lies between complete purity and pure completeness.

With the use of a special mapping technique that focuses on overdensities, this optimal sample is plotted and the bar and spiral arms become distinguishable (see Figure 2). The inner disc of the Large Magellanic Cloud is mainly bar dominated. One can spot the spiral arm that starts at the end of the bar at around (-3,0) kpc in Figure 2. 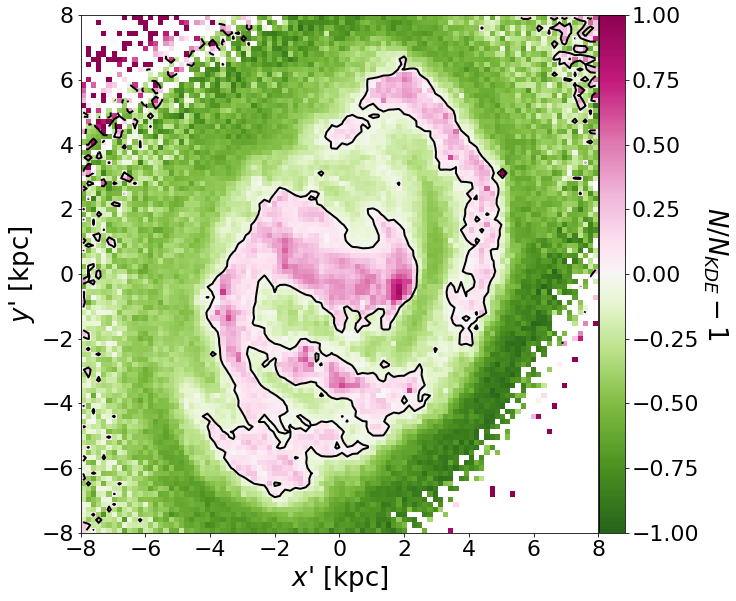 Figure 2: A map of the Large Magellanic Clouds where the overdensities are plotted. This allows the creation of contour lines that reveal the location of the bar and the spiral arms. Credits: Jiménez-Arranz, et al. A&A 2023.

From the full sample of a few million Large Magellanic Cloud stars, only a subsample of about 20,000 stars has the third velocity component defined. In the top figure, Figure 1,  the velocity map is shown for the three velocity components of the subsample. It is the first time that the map on the right, showing vertical velocities, can be created. Without Gaia's Data Release 3 this would not have been possible.

The first map on the left in Figure 1 shows the radial velocities. Bear in mind that these are the radial velocities as observed from the centre of the Large Magellanic Cloud (or the location 0,0 in that map). They give an indication of the direction of the stars away or towards the centre. The velocity map in the middle of Figure 1 shows the residual tangential velocity, also with respect to the center of the Large Magellanic Cloud. We can see that the kinematics of the spiral arm is dominated by an inward motion and a rotation that is faster than that of the disc in the piece of the arm attached to the bar (the contours reflect the bar and spiral arms as explained in Figure 2).

On the right in Figure 1 the vertical velocity is shown. This is the third velocity component that so far was missing. A clear bimodality is seen here, with part of the plot bluer and the other part redder. There are many explanations possible for this bimodality. Either there is a contamination of Milky Way stars, or the inclination of the Large Magellanic Cloud with respect to our viewpoint from inside the Milky Way has been overestimated. Another explanation could be that this is caused by a warp. Also the Milky Way is warped, and similarly, the Large Magellanic Cloud could be subjected to this as well, making part of the galaxy move upwards, and the other side moves downwards.

Figure 3 shows the same velocity maps but for the full sample of the Large Magellanic Cloud stars without the third velocity component (so the few million stars as opposed to the ~20,000 stars). Evidently, the map for the third velocity component there is missing. The fact of not having the line-of-sight velocities does not bias too much the results as seen in this Figure (compare Figure 1 and Figure 3).

Figure 3: Velocity maps of the full sample of Large Magellanic Cloud stars with on the left the map of radial velocities, and on the right the map of residual tangential velocities. Credits: Jiménez-Arranz, et al. A&A 2023.

With Gaia's Data Release 3 we have been able to map and see the cloverleaf pattern in the center of our Milky Way caused by the stars orbiting the Galactic centre (see Gaia Collaboration, R. Drimmel et al. 2022). Similarly, now with Gaia's Data Release 3 we can see this velocity imprint also in full detail in the Large Magellanic Cloud, and add the third velocity component to its stars. Exciting times to study galaxy kinematics!