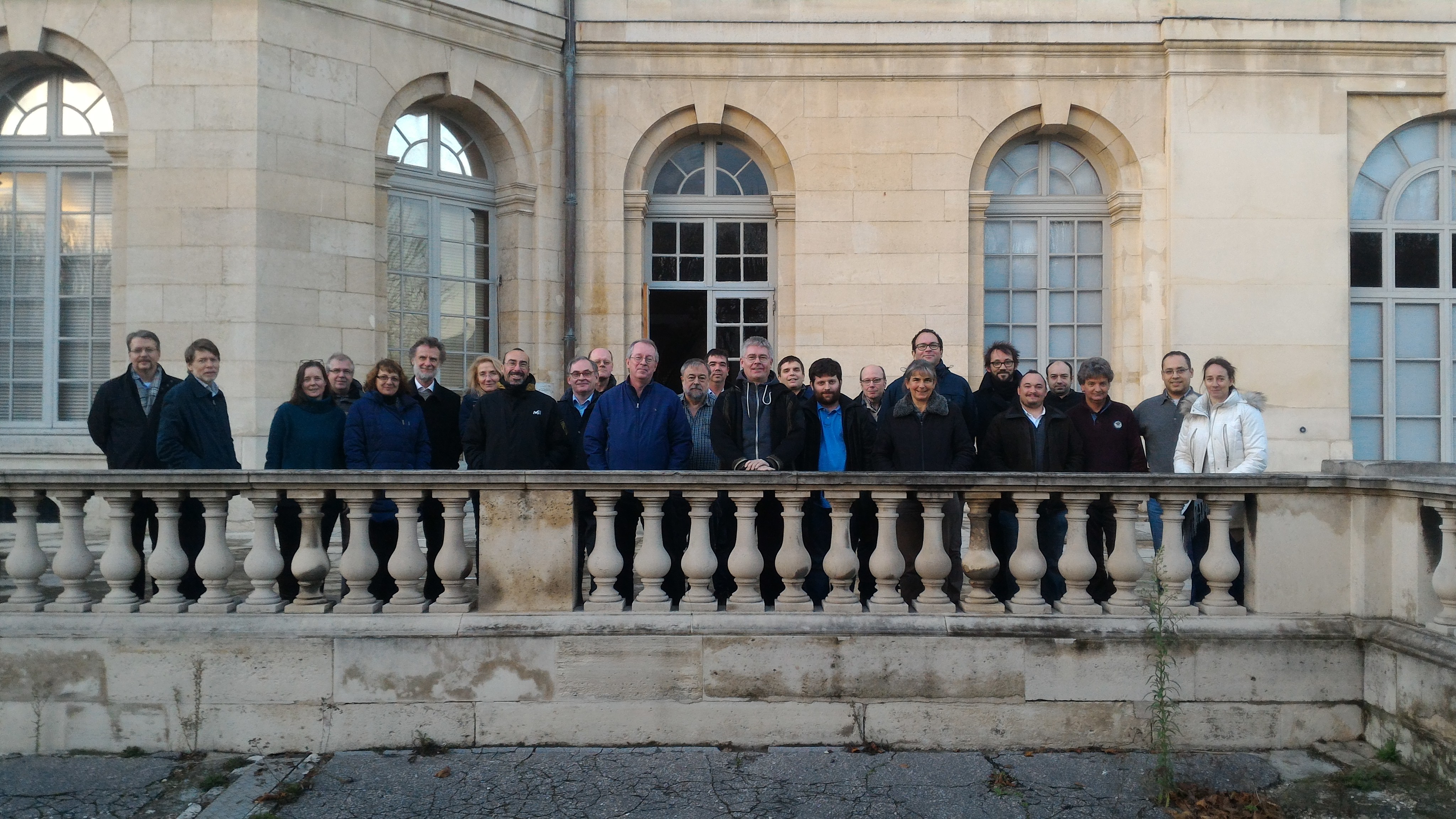 Gaia Coordination Unit 6 responsible for the spectroscopic reduction at their last meeting in December 2017 in Paris (France). Picture taken by Steve Baker.

The premises of CU6 were laid in the late 90’s, when the early Gaia concepts were being developed and a spectrometer, the Radial Velocity Spectrometer (RVS), was incorporated into the payload. Gaia was originally intended to be an astrometric mission, akin to its predecessor Hipparcos, but one of the lessons learned from Hipparcos was the importance of radial velocity to complement astrometric information and collect 3D-motion information to help understand the kinematics of our Milky Way.

As soon as the RVS concept was born, a small group of people started to work independently on instrumental requirements and simulations. When Gaia was announced as a “cornerstone” mission by ESA in 2000, making the RVS dream become true, more people joined. The RVS Working group was created in 2001, with the main task of refining the scientific objectives and supporting the industry to convert the scientific specifications into technical specifications. Much work was dedicated to proto-typing the RVS and simulating data to assess the performances that could be achieved with this instrument.

Gaia feasibility was accepted in 2006, leading to the creation of the Data Processing and Analysis Consortium (DPAC). On this occasion, the RVS Working group was renamed Coordination Unit 6 (CU6). The task of CU6 was to prepare the treatment of the RVS data, with as main objective the extraction of radial velocities. The development of the appropriate scientific codes was entrusted to science teams from several institutes in Europe (Meudon Observatory, MSSL, AIP, Universities of Antwerp, Bordeaux, Brussels, Liege, Ljubljana, Montpellier) and one in Africa (as one scientist moved to the University of Algiers). The responsibility of Data Processing was entrusted to CNES in Toulouse, together with the responsibility of producing the spectroscopic pipelines and of integrating the scientific codes in a specific infrastructure able to treat a large amount of data.

The development of sophisticated algorithms required hard work by the science institutes for several years, in the same way as the development of the pipeline infrastructure at CNES.  Interestingly, the development of sophisticated algorithms to treat the complex RVS data was not the most difficult task of CU6. The biggest challenge was to make all software work together in the pipeline infrastructure and to understand the real nature of the input data, which result from treatment by the upstream Coordination Units.

The expertise of the people involved was fundamental to make the complex pipeline system work, but what also turned out to be a crucial element for overcoming the obstacles involved was efficient communication. Indeed, the fact that the integration and the science teams were not collocated could have been an obstacle to CU6 achievements. The two teams speak different languages, and what is obvious for the science team is not necessarily so for the technical integration team, and vice versa. Also, as expected, the two teams have different priorities: the science team would like to continuously develop/improve/alter their codes, while the technical team requires a stable code to integrate. The time dedicated to efficient communication and adapting to each other’s needs was salutary from this point of view.

In the end, thanks to the hard work of the entire CU6 team and the ‘body and soul’ dedication of a small group of people, the pipeline became operational. Operations started on July 2016 and the processing, re-processing and validation of Gaia Data Release 2 data for over a year led to the amazing results we are publishing in Gaia DR2.

The Gaia DR2 radial velocities are the result of years of hard work by the CU6. Thank you CU6!

This is only the first step, as Gaia DR2 focused on the “easy” part of RVS data, corresponding to bright stars. Much work remains to be accomplished to enable the pipeline to process data for fainter stars. The CU6 team will continue to strive together to reach the goals of future releases.