The Gaia Data Release 3 (DR3) will offer access for the first time to mean low-resolution spectra obtained from a combination of a number of epoch Blue and Red Photometer (BP and RP) observations covering the optical to near-infrared wavelength range [330, 1050] nm. These will be available for about 220 million sources, mostly brighter than G=17.65.
Their signal-to-noise ratio varies significantly over the wavelength range covered and with magnitude and colour of the observed objects (see the image of the week on Signal-to-Noise Ratio for Gaia DR3 BP/RP mean spectra), with sources around G=15 having S/N above 100 in some wavelength ranges.

Detailed information about the BP/RP spectral data in DR3 will be available in a number of papers: De Angeli et al. 2022 will describe the processing that converts the raw data into mean spectra in an internal reference system that is homogeneous across all instruments (defined by different CCDs and instrumental configurations and by their variations in time). Montegriffo et al 2022 will detail the algorithms defining the calibration that links the internal system to the absolute flux and wavelength system. Both these papers will show several results of the validation done by the same team that processed the data. Finally, Babusiaux et al. 2022 will include a section on the independent validation of the BP/RP data in Gaia DR3. In addition to these, one of the performance verification papers (Gaia Collaboration, Montegriffo et al. 2022) will focus on synthetic photometry generated from the BP/RP mean spectra, exploring some potential scientific application and showing the performances that can be achieved in different photometric systems.

The Gaia DR3 BP/RP spectra are represented in a somewhat unusual format as a continuous function defined as a combination of basis functions. While the usage of this continuous representation is recommended to make optimal use of the available information and to ensure a full treatment of covariances, there will be use cases that might benefit from a more traditional format of the spectra or from a simplified analysis based on synthetic photometry in a specific set of bands. For this reason, and to facilitate users of the Gaia DR3 BP/RP spectral data, a Python library, GaiaXPy, has been developed offering a set of tools operating on data as served by the Gaia archive.

GaiaXPy can handle input spectra in all formats available from the archive (CSV, ECSV, FITS and VOTable). The results can be written to files in any of the input formats. It is also possible to call the GaiaXPy functions with a list of source identifiers (more info on source identifiers here), in which case the corresponding data is downloaded from the archive via Astroquery.

The first release of GaiaXPy is now available together with a small random selection of BP/RP spectra to enable the community to familiarise itself with this new data product and tool. The sources included in the sample dataset have been anonymised (i.e. the source_ids have been replaced with a sequence of long).

This first release offers access to the following functionalities:
● Calibration of internally-calibrated continuously-represented mean spectra to the absolute system
● Conversion of mean spectra from a continuous representation to a sampled spectrum
● Generation of synthetic photometry in bands that are covered by the BP/RP wavelength range

For more information on GaiaXPy please refer to the tool webpage (also shown in the image) where links to the on-line documentation, repository and to the tutorials are available. The sample dataset can be downloaded in the various data formats from the download link below.

Get a sample dataset here

If you make use of GaiaXPy for your research, please use the following acknowledgement in addition to the standard Gaia one:

This work has made use of the Python package GaiaXPy, developed and maintained by members of the Gaia Data Processing and Analysis Consortium (DPAC) and in  particular, Coordination Unit 5 (CU5), and the Data Processing Centre located at the Institute of Astronomy, Cambridge, UK (DPCI).

When citing GaiaXPy, please use the DOI for the correct release you have used. The DOI for this first release is 10.5281/zenodo.6563093. A paper is also in preparation and details will be added to this page and to the GaiaXPy webpage as soon as available. 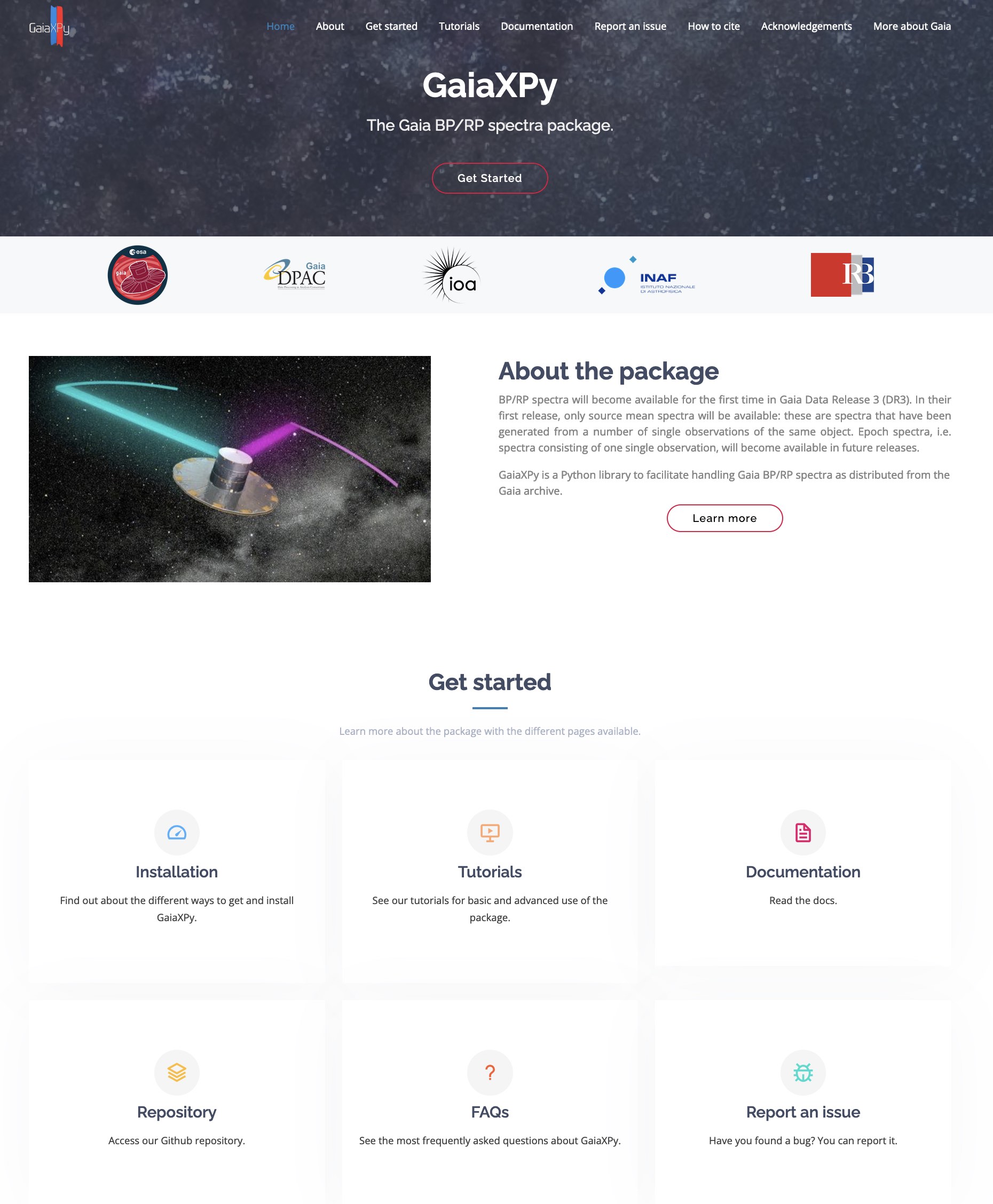