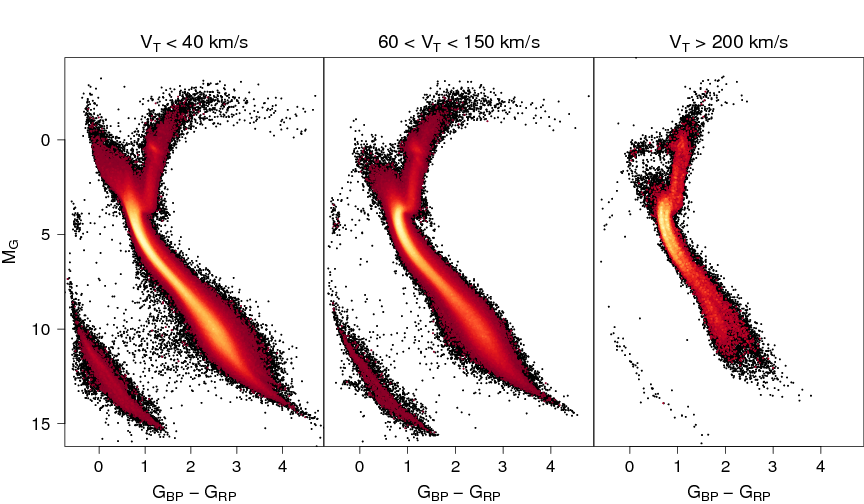 Gaia Hertzsprung-Russell diagrams, Gaia absolute magnitude versus GBP-GRP colour, as a function of the stars tangential velocity (VT), using Gaia DR2 with relative parallax uncertainty better than 10% and low extinction stars (E(B-V)<0.015), together with astrometric and photometric quality filters. The colour scale represents the square root of the density of stars.

The deep, homogeneous and high precision Gaia DR2 astrometry and photometry allows to build the most detailed Hertzsprung-Russell diagrams to date. From those data, one does not build a single but many different Gaia Hertzsprung-Russell diagrams (HRD) depending on stellar population selections. The paper "Gaia Data Release 2: Observational Hertzsprung-Russell diagrams" by Gaia Collaboration et al. 2018 shows many different HRDs, including field stars, open clusters and globular clusters, as well as comparisons with stellar models. Figure 1 shows the Gaia HRDs obtained by selecting stars with a relative parallax uncertainty better than 10% and low extinction (E(B-V)<0.015), together with  astrometric and photometric quality filters, as detailed in the above referenced paper.  The three tangential velocity selections presented here correspond to classical kinematic selections of the thin disk, the thick disk and the halo respectively.

The global properties of the Gaia HRDs are detailed in the paper: the main sequence is extremely thin for F-G-K stellar-type stars, it gets thicker for late K, early M stars, then thin again. The imprint of the binary sequence is seen, 0.75 magnitude above the main sequence, producing a second tail of red dwarfs. At the bottom of the main sequence we have M, L and T type brown dwarfs, best visibles using GRP colour. The red giant branch look small on this diagram's scale compared to what it was in the Hipparcos HRD, but there are lots of details if you zoom: the sharply pronounced red clump, the secondary red clump, the red giant branch and asymptotic giant branch bumps. Rapid phases of the stars end of life are also represented such as hot subdwarfs and the central planetary nebulae stars moving towards the white dwarf cooling sequence. The white dwarf sequence is so thin that we can actually see for the first time the split between the hydrogen and the helium white dwarf in an HRD as well as the carbon white dwarf sequence.

The kinematic cuts in the above figure select different populations of varying age and metallicity with a corresponding change visible in their HRD. The thin disk kinematic selection (left) shows features typical of a young population: young hot main sequence stars are present and the turn-off region is diffusely populated. The thick disk kinematic selection (middle) shows a more localised turn-off, typical of an intermediate to old population, with the median locus of the main sequence being similar to the thin disk selection, indicating a similar metallicity. The halo kinematic selection (right) presents for the first time two very distinct main sequences and turn-offs, corresponding to a metallicity difference of about 1 dex. From both their kinematics and their chemistry, both components seem to originate from very different formation scenarios.

Gaia DR2 opens a full new area for studies based on Hertzsprung-Russell Diagrams, for both stellar evolution and stellar population studies.