Meet your neighbours: CNS5 - the fifth catalogue of nearby stars 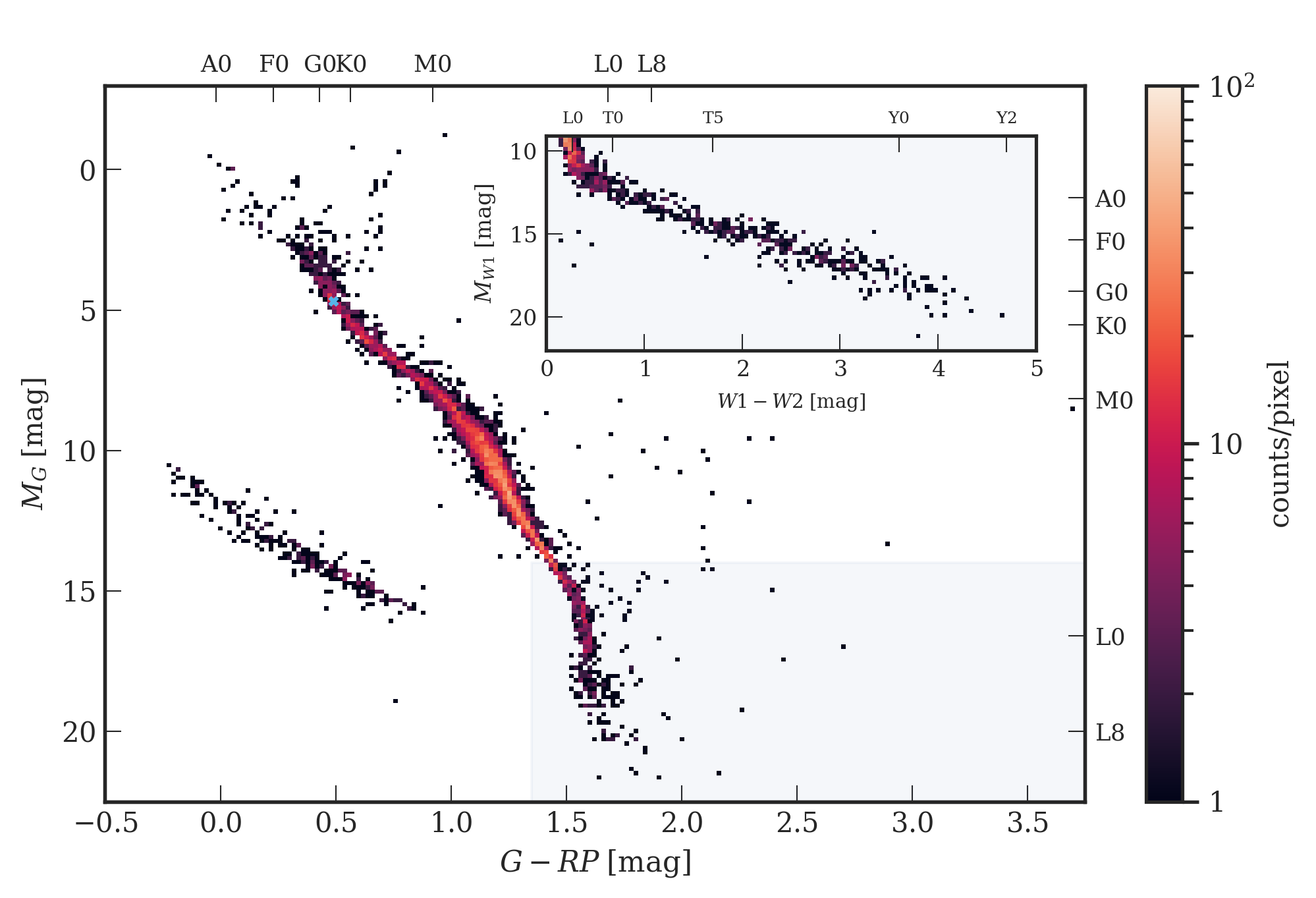 Figure 1. Colour-magnitude diagram (CMD) for all CNS5 objects in both Gaia EDR3 and WISE photometric bands. The main plot shows the G − RP colours of Gaia EDR3 objects, including those with synthetic colours, as well as objects from HIPPARCOS that do not have a counterpart in Gaia EDR3, with converted G and RP magnitudes. The top and right axes indicate the spectral type, and the blue cross represents the position of the Sun on the CMD. The grey shaded area corresponds to the region where the number of main-sequence objects not present in Gaia starts to increase. This region is represented in an inset plot in WISE bands, with the spectral type denoted on the top axis. Colour represents the density of star counts per pixel. Credits: Golovin et al. A&A 2023

The CNS5 contains in total 5931 objects, including 5230 stars and 701 brown dwarfs. Of the stars, 4946 are main-sequence stars (stars that are still burning hydrogen in their cores), 20 are red giants (stars that have exhausted their supply of hydrogen and are expanding), and 264 are white dwarfs (remnants of dead stars that have exhausted their fuel and are cooling off), see Figure 1. An update was indeed required, as the most recent publicly available version of the catalogue of nearby stars was published more than 30 years ago and was entitled the Preliminary Version of the Third Catalogue of Nearby Stars (Gliese &Jahreiß 1991). The fourth version of the catalogue, CNS4, had been prepared but never published.

The compilation of the CNS5 is much more complicated than just selecting all sources with parallaxes larger than 40 mas which corresponds to a maximum distance of 25 pc or 81.5 light-years, respectively. The reasons include a number of issues: i) spurious catalogue entries with apparently large parallaxes, which have to be filtered out; ii) blended sources whose photometry has to be deblended before they can be reliably placed into a Hertzsprung-Russell diagram; and iii) cross-matching of binary and multiple stars can be a difficult task too, as the position on the sky of their components is constantly changing due to the orbital motion. In addition, quite often reliable parallaxes are not available for all of the components and different catalogues may use different approaches to identify binary and multiple stars, which can lead to differences in the number and characteristics of these systems listed in each catalogue.

While the majority of the objects (87%) in the Fifth Catalogue of Nearby Stars are coming from Gaia EDR3, a variety of catalogues and surveys is needed to construct a truly complete catalogue. The Gaia EDR3 catalogue does not contain the brightest stars, thus information from the Hipparcos Catalogue for these brighter stars was added. To complement for optically faint objects, like brown dwarfs, information from ground-based infrared parallax surveys (Best et al. 2021; Kirkpatrick et al. 2021) was added as well. 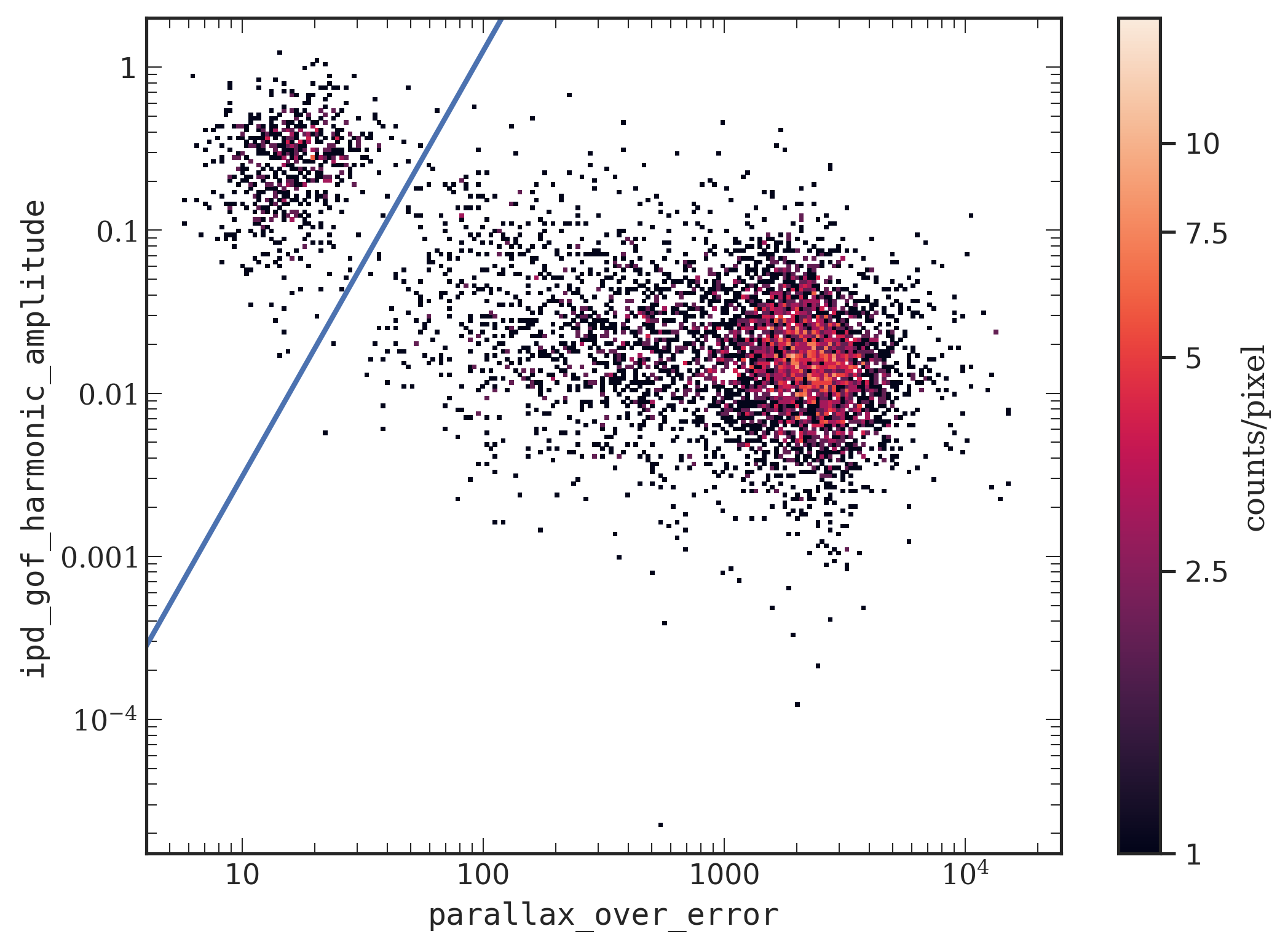 Figure 2. The blue solid line separates the sources into two groups: sources located above the line have astrometric solutions that are considered spurious, while those located below the line have solutions that are considered to be reliable astrometric solutions in Gaia EDR3. 692 sources, or 11.78% of the total, fall into the spurious category and are located above the threshold defined by the blue line. These spurious sources were removed and are no longer part of the CNS5. Credits: Golovin et al. A&A 2023

To select only sources with reliable parallaxes from Gaia EDR3, the authors applied a simple yet powerful cut (See Figure 2) on the amplitude of the Image Parameter Determination goodness-of-fit (IPD GoF; ipd_gof_harmonic_amplitude in Gaia EDR3). This parameter can be regarded as a proxy for the asymmetry of the image, and sources with a large IPD GoF amplitude and a low parallax-over-error ratio turned out to be spurious. A simple RUWE cut, which has been often used before, is prone to magnitude-dependent biases and could be shown to be not optimal for constructing a catalogue where not only completeness but also cleanliness is important.

In addition, CNS5 provides synthetic (or deblended) G-RP for objects with photometry in Gaia EDR3 with a sufficiently large signal-to-noise ratio. These are derived from the model fit to the Gaia photometry for a carefully selected sample of objects with high-quality BP and RP photometry. Using original G-RP colours (as published in Gaia EDR3) for objects affected by blending or contamination would yield a Hertzsprung-Russell diagram where these objects appear redder than expected and do not fall on the main-sequence or white dwarf sequence where one would expect them, as illustrated in Figure 3. This issue affects primarily BP and RP fluxes (but not their ratios!) because the CCD windows there are much larger than those of the astrometric field from which the G flux is derived. Thus, the blending correction to the G-RP colour can be derived based on the BP and RP fluxes. This method is applicable not only to nearby stars but can be useful for a number of other science cases. 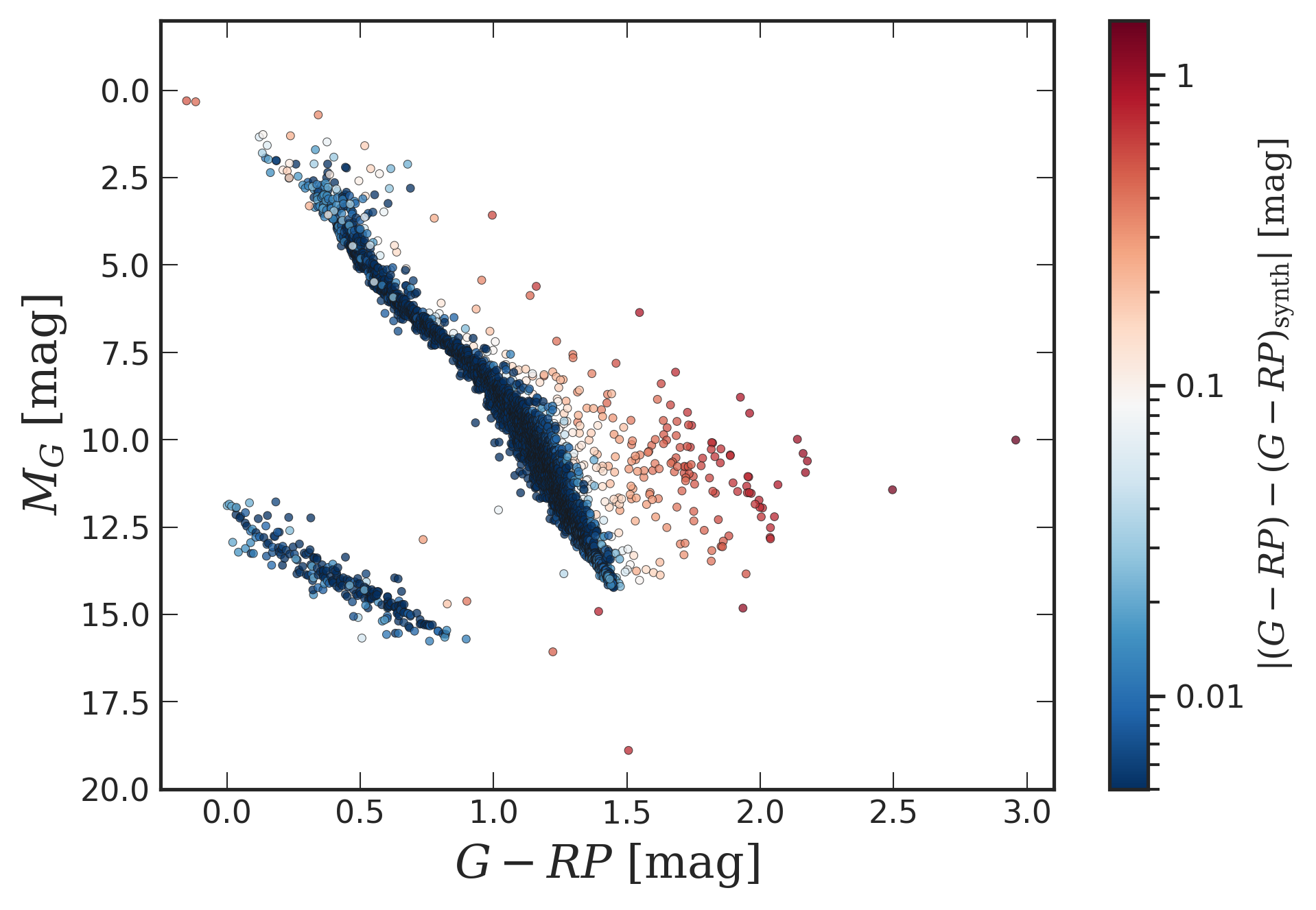 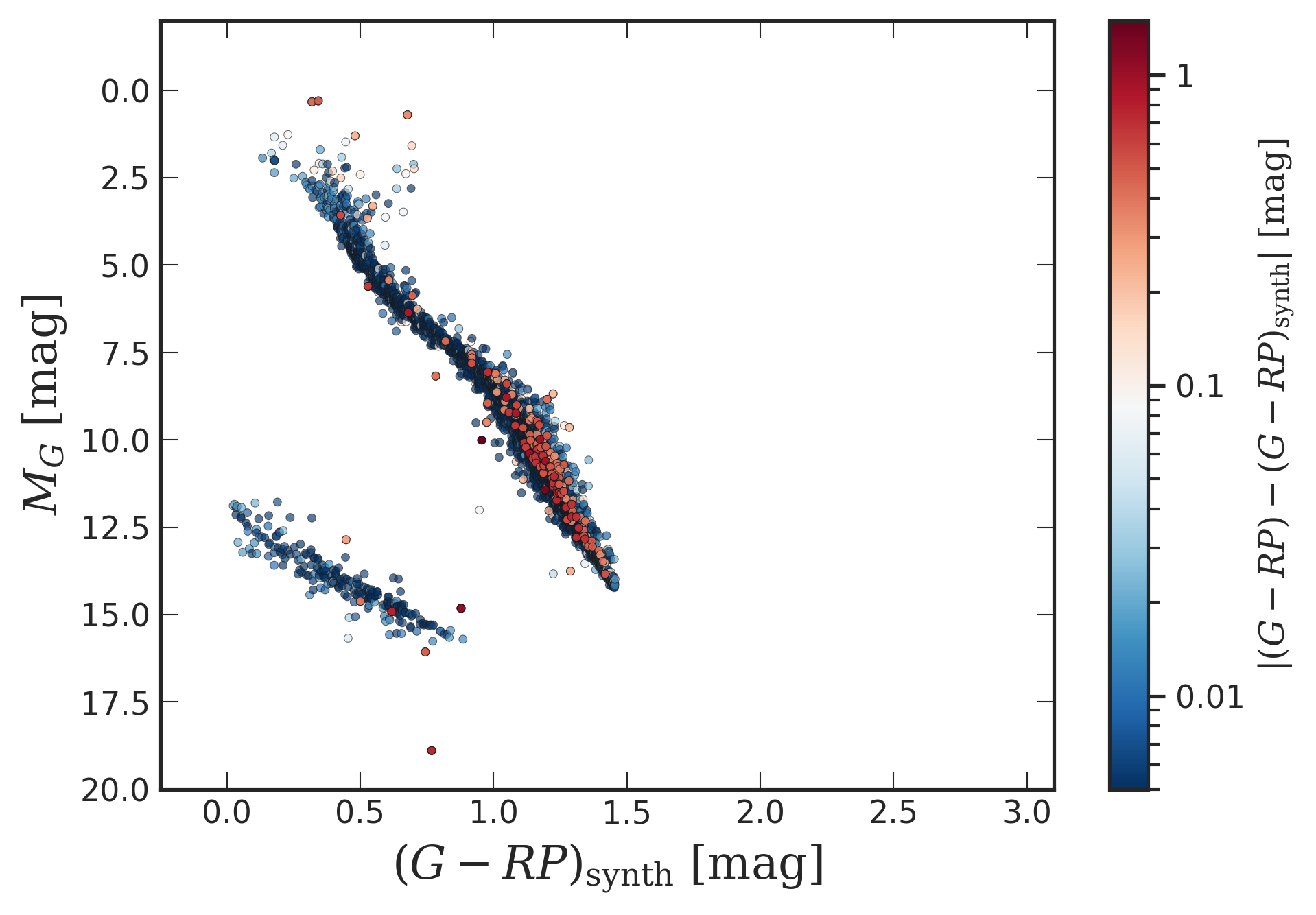 Figure 3. Difference between the measured and deblended G − RP colours for objects in the CNS5 that have a counterpart in Gaia EDR3 and their location on the Colour Magnitude Diagram (CMD). Top: CMD using the measured G − RP colour (as published in Gaia EDR3). Bottom: CMD for the same sample, but using synthetic (deblended) G − RP colours from the CNS5. The colour bar indicates the absolute difference between the measured and synthetic G − RP colours. The stars colour-coded in red are the ones with the largest differences between the two colours. Only objects with BP − RP colours within the applicability range 0.0 mag < BP − RP < 4.25 mag are plotted. The colour scale is logarithmic. The two CMDs illustrate the impact of deblending on the colours and positions of the stars in the CMD. Credits: Golovin et al. A&A 2023

As opposed to the Gaia Catalogue of Nearby Stars (GCNS), which lists all stars within 100 pc, the CNS5 adheres to its traditional volume of 25 pc around the Sun. In order to make statistical analyses based on the volume-limited sample as a whole easier, it strives for completeness and purity in the final census of nearby stars to the greatest extent possible. Naturally, completeness is higher in the CNS5 than in the GCNS, but this comes at the expense of a smaller volume. The applications of the two catalogues are thus to some extent complementary.

Stars in the solar neighbourhood help us to understand better the more remote parts of our Galaxy. Also, solar neighbourhood stars are of great importance, as only there we can detect the majority of brown dwarfs and white dwarfs. Detecting such faint and compact objects at larger distances is so challenging that many of them are yet to be discovered. Furthermore, nearby stars are frequently used to develop concepts that are then applied elsewhere in the universe. Thus, the CNS5 catalogue can be used for a broad range of applications, including estimating the number of stars in the Galaxy and modelling the Galactic disc, the present-day and initial mass functions, the stellar luminosity function and its fine structure, constraints on star formation, the local stellar number density, stellar multiplicity, brown dwarfs, and exoplanet target lists.

The next version of the catalogue, CNS6, is already in preparation, and it will be focused on providing more information about multiplicity as well as astrophysical parameters for all stars in the CNS.

Animation: This is a visualisation of the updated Catalogue of Nearby Stars 5 (CNS5), featuring stellar systems located within a distance of 25 parsecs or 81.5 light-years from the Sun. It is based on the paper "The Fifth Catalogue of Nearby Stars (CNS5)" by Alex Golovin et al. (A&A 2023). The animation was created using Gaia Sky and begins with a flyover view of the Milky Way galaxy before transitioning to a close-up of the stars listed in the CNS5. It also illustrates the movement of these stars as measured by the Gaia and Hipparcos space telescopes, and some ground observatories. The region within 25 parsecs of the Sun, known as the immediate solar neighbourhood, is a unique and diverse mixture of stellar populations. It has served as a testbed for various concepts and theories, which can be applied and extended to other regions of our Galaxy that are more difficult to observe directly. Credits: The video was created by Stefan Jordan with Gaia Sky, developed by Toni Sagristà at the Astronomisches Rechen-Institut, University of Heidelberg, Germany. Narrator voice produced with the free text-to-speech converter https://ttsmp3.com. CC BY-SA 3.0 IGO