Gaia's observation of relativistic deflection of light close to Jupiter 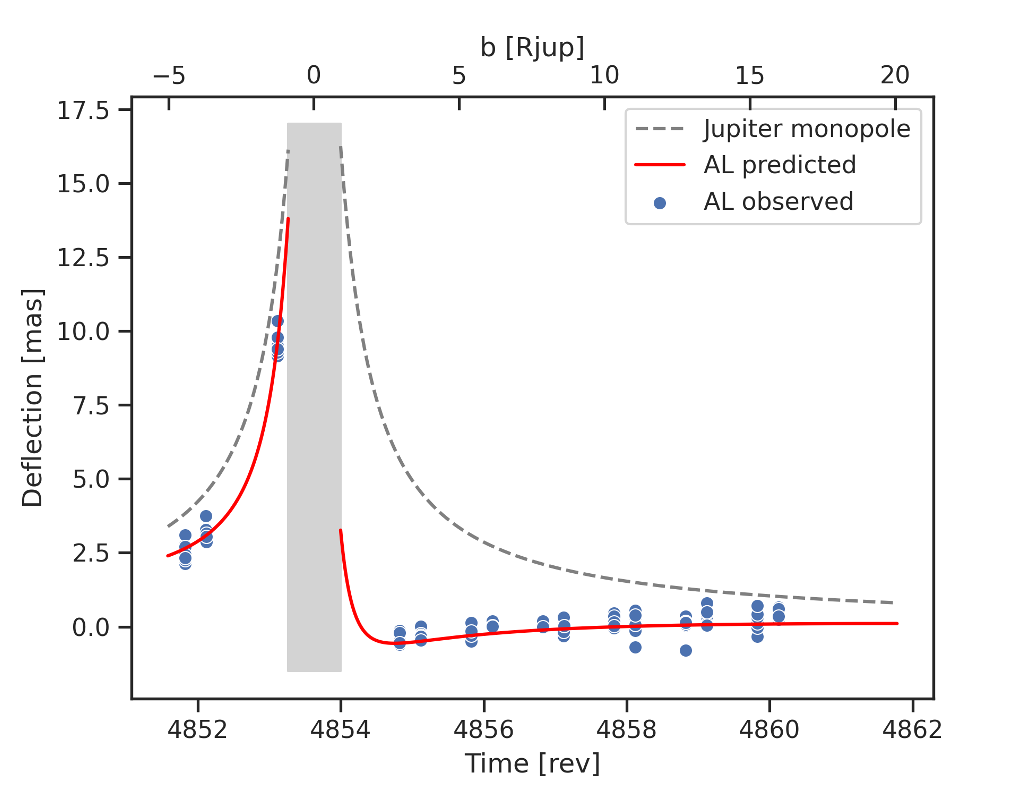 The “deflected” target star position on various transits (15 most relevant transits out of 25) after its transformation to the reference frame. The blue circles depict the result obtained for each CCD measurement within a transit with the gray shaded area showing the exclusion zone of Jupiter’s disk. The gray dashed line shows the predicted total light deflection due to Jupiter whereas the red continuous line shows the combined deflection due to Jupiter and the Sun projected in the along scanning direction as predicted by GR. The tick marks at the top show the distance from the planet’s center in units of the radius of Jupiter. We note that the uncertainties of Gaia measurements (not shown here) are larger than normal due to the difficulties to obtain reliable astrometry so close to the bright limb of Jupiter. Credits: Abbas, et al. 2022

The first observation of the deflection of light in the Solar System was conducted by F. Dyson and A. Eddington in 1919 and verified Einstein’s theory of General Relativity (GR) using observations of several stars close to the Sun. 103 years after that experiment Gaia has revisited relativistic light deflection in the optical, this time around Jupiter, thanks to its high-precision astrometric observations. The Gaia space satellite has successfully observed a bright star (G = 12.8 mag), the closest ever to Jupiter’s limb, barely 7", and a follow-up analysis has revealed a 10 milliarcsecond (mas) deflection signal projected in the along scan (AL) direction. This is the strongest deflection signal at any wavelength for a star observed in the vicinity of any planet in the Solar System.

The first detection of relativistic deflection by a body other than the Sun, i.e. Jupiter, was obtained in the near-occultation event of March 21, 1988 with the Very Long Baseline Interferometry (VLBI) measurements, when the ray path of a radio source came within 200 arcsec of Jupiter (Treuhaft & Lowe 1991). This was followed by a more precise VLBI measurement that was obtained on September 8, 2002 of light from a quasar as Jupiter passed within 3.7 arcminutes (Fomalont & Kopeikin, 2003). Other attempts in the optical with the Hubble Space Telescope (HST) were made in 1995 but the results were only presented at the American Astronomical Society DDA meeting (see abstract) with no followup publication.

Fast forwarding to 2022, the recent Gaia Data Release 3 on 13 June has produced the most comprehensive astrometric, photometric and spectroscopic catalogue of roughly 1.8 billion objects in our galaxy. The global measurement principle of Gaia essentially covers the whole celestial sphere and the Astrometric Global Iterative Solution is what has allowed for an astrometric catalogue of unprecedented precision through a careful treatment of the attitude and calibrations of the spacecraft. Using the principles of Differential Astrometry one can model astrometric events in small fields, opening up a whole new possibility for studying various astrophysical effects, such as relativistic light deflection events over a few days, microlensing events over months and orbits of exoplanets on timescales of years.

Back in 2006, M. Crosta (Astrophysical Observatory of Turin) and F. Mignard (Observatoire de la Côte d'Azur, Nice) in their paper had already shown that the motion of a giant planet such as Jupiter along its orbit causes favourable scenarios where Jupiter, as seen by Gaia, lies in close proximity (i.e. within ten arcseconds from its limb) to relatively bright stars. Under such conditions the Gaia Relativistic Experiment on Quadrupole (GAREQ) light deflection was designed in order to study the deflection of ’grazing’ starlight due to Jupiter’s spherical mass distribution (monopole moment) and oblateness/non-sphericity (quadrupole moment).

A situation with bright stars close to Jupiter generally arises as Gaia scans close to the galactic plane and depends on the initial scanning law parameters. The follow-up optimization campaign carried out by the dedicated working group within the Data Processing Analysis Consortium (DPAC) of Gaia, with a further fine-tuning of the spin phase of the satellite, led to the predicted optimal configuration of three stars with G smaller than 15.75 close to Jupiter’s limb (i.e. within 6 Jupiter radii) for the time frame of 22 to 26 February 2017. The high-cadence observations obtained by Gaia on February 2017 were highly successful, with the closest star observed barely several arcseconds from Jupiter’s limb, despite the presence of strong straylight effects from the extremely bright Jupiter disk affecting observations at such close separations.

During this event the closest bright star with G = 12.78 mag was observed on 25, almost consecutive, transits spread across a few days surrounding the observation at closest approach that took place at 02h 54m 56.450sec (UTC) on the morning of February 23, 2017. After a careful treatment of the data and a sophisticated differential astrometric analysis, very good agreement was obtained between the along-scan projected observations and the predicted deflection by General Relativity (see Figure). More details are given in Abbas et al. 2022.