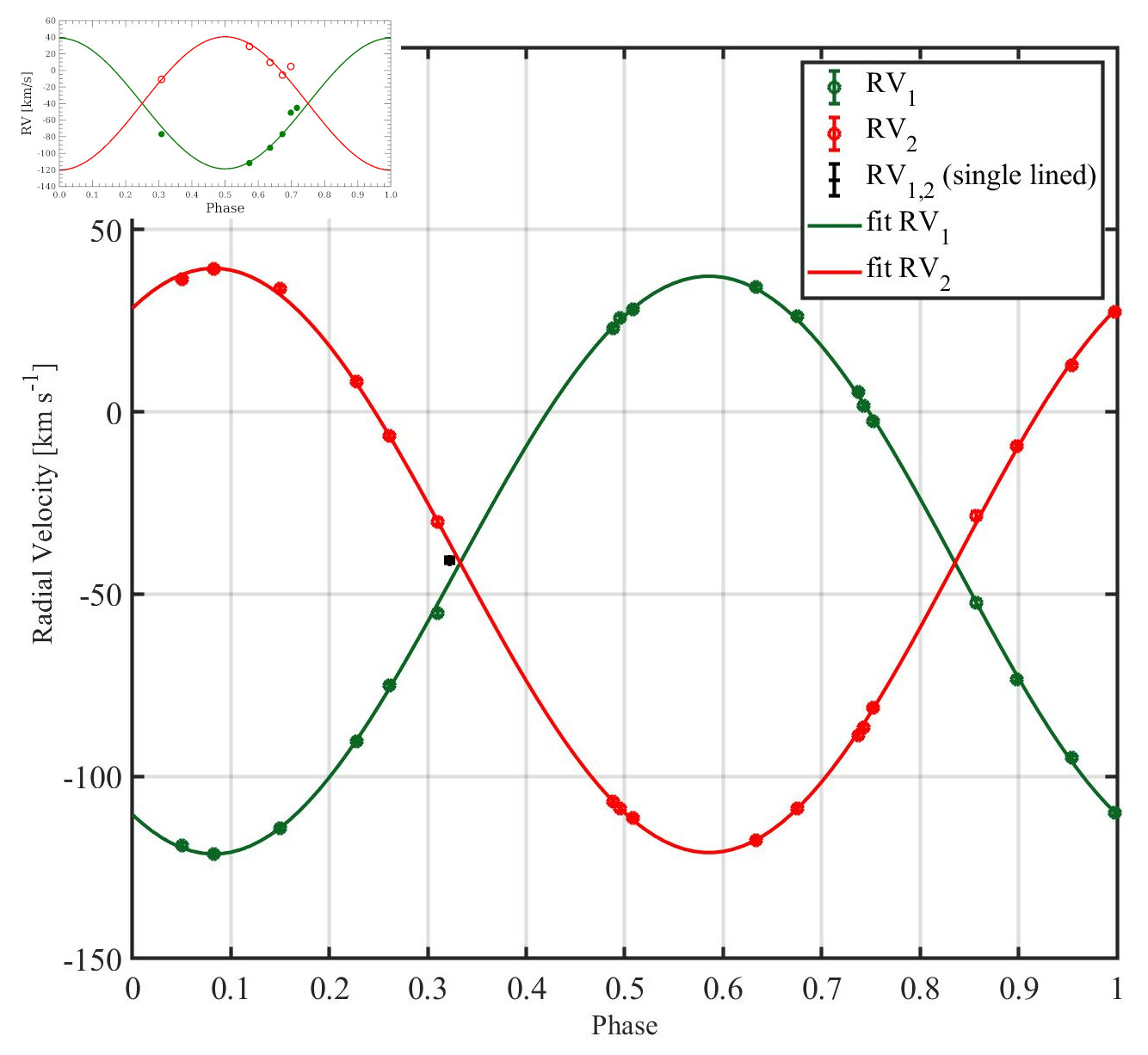 Figure 1: HIP 70674 radial velocities folded according to the derived orbital period. It contains 18 double lined transits (green and red dots) and 1 single lined transit (black dot). The error bars are smaller than the symbols. The radial velocity curve showing predicted fit lines as published in this 2015 IoW is shown at the top left corner. The phase shift of ≈ 0.41 between the two figures is due to the difference of our derived orbital parameters compared to those from the SB9 catalogue.

In 2015, after one year of data acquisition by Gaia, we reported the case of HIP 70674, a well-known double lined spectroscopic binary (SB2), with visual magnitude V=7.99. The aim was to demonstrate the capability of the Coordination Unit 6 (CU6) Single Transit Analysis (STA) pipeline to measure radial velocities from double lined spectra as observed by the Radial Velocity Spectrometer (RVS). The composite spectra have lines with smaller relative depths compared to single lined ones but the radial velocities derived by Gaia are still of very good quality. In the 2015 IoW, the measured radial velocities were plotted according to the ephemerides from the literature (SB9: Pourbaix et al. 2004).

We are now approaching Gaia Data Release 3, which will contain the results of the Coordination Unit 4 (CU4) Non Single Star (NSS) pipeline for SB2 stars. Presented here are the CU4 NSS pipeline results for HIP 70674 as an example of this processing.

First, this star passed through the STA pipeline, which processed simultaneously all its spectra (per-source processing) to ensure that they are modeled using a composite synthetic spectrum based on the same pair of templates over all transits. The pipeline measured the broadening velocity(*) for every component as well as their epoch radial velocities. Figure 2 shows two examples of the fit of an observed spectrum of HIP 70674 by the best composite synthetic spectrum. 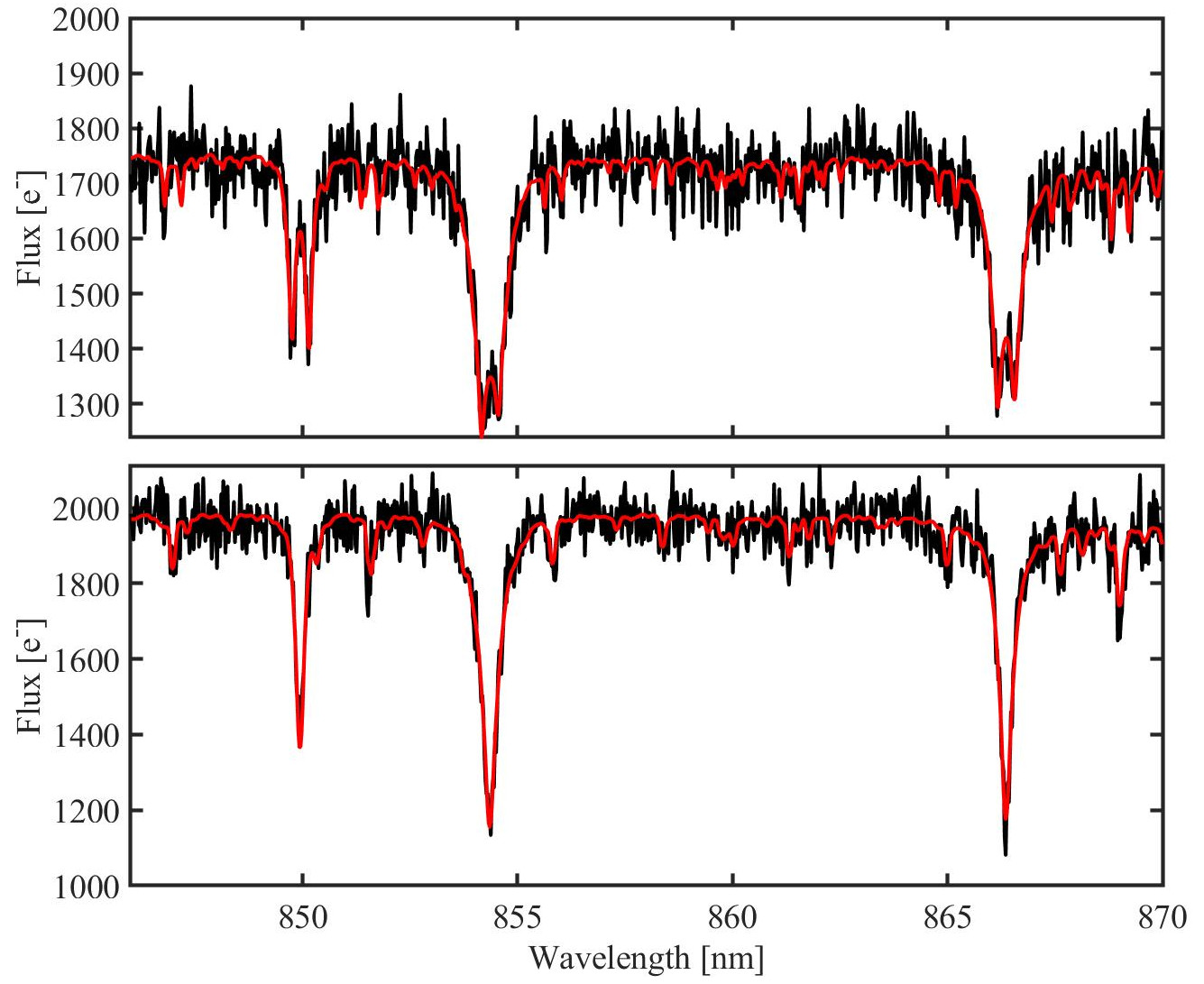 The radial velocities provided by the CU6 STA pipeline are then processed by the CU4 NSS pipeline, which is intended to determine the orbital solutions of the spectroscopic binaries.

Due to the similarity of the two stars, in terms of brightness and of spectral types, it should be noted that the STA pipeline cannot easily identify on a given transit which of the two measured radial velocities shall be assigned to one or the other of the two components. The association of the radial velocities is then performed by a dedicated period searching and sorting algorithm implemented in the NSS pipeline.

Figure 3 shows the diagram of RV2 versus RV1 after they were sorted by the NSS pipeline. The two sets of velocities are, as expected from the theory, perfectly anti-correlated (correlation coefficient = -0.999). This reflects the quality of the measurements as well as the efficiency of the sorting that was carried out. 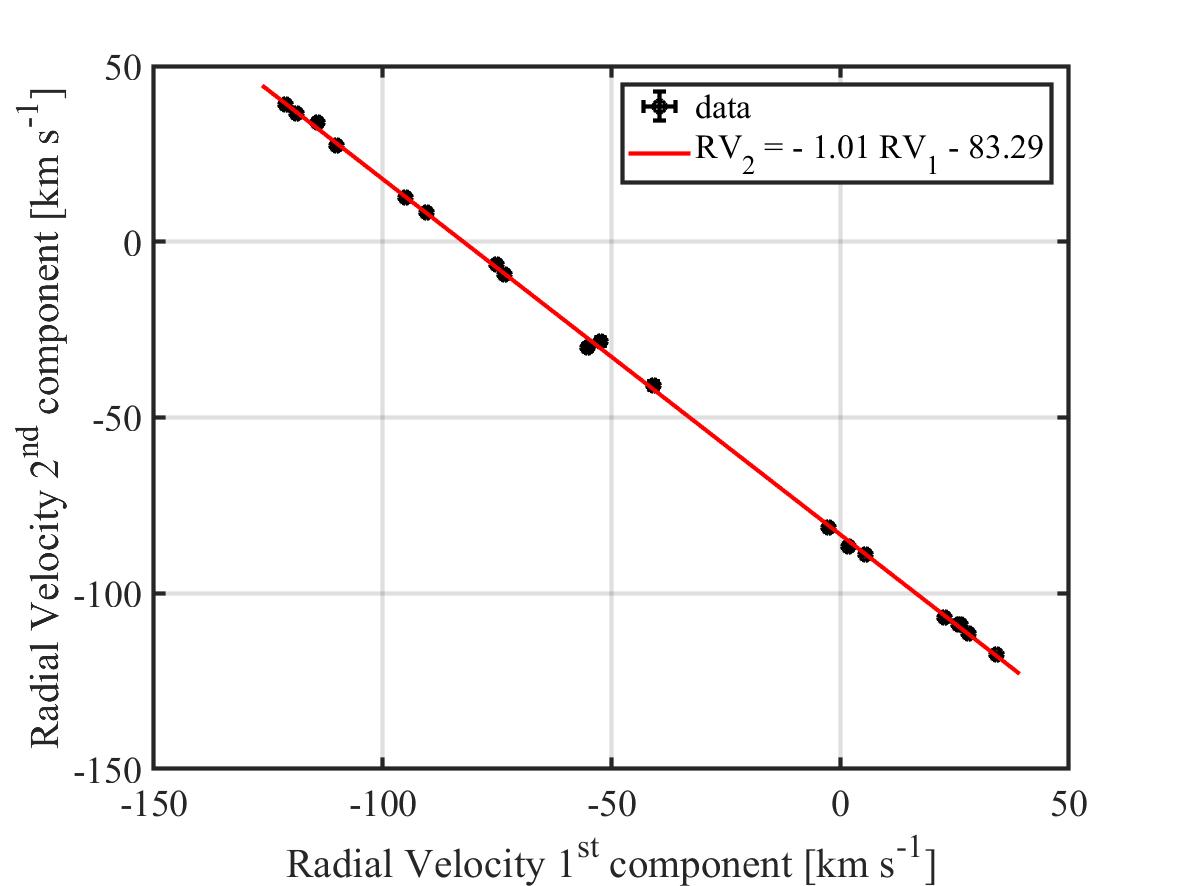 Figure 3: The diagram RV2 versus RV1 after DU434 sorting. The two sets of velocities are perfectly anti-correlated (correlation coefficient = -0.999).

The final phase folded curve is plotted in Figure 1. The orbital elements are of high quality and in good agreement with the published ones:

In about one year, Gaia Data Release 3 (Gaia DR3) will release thousands of orbital solutions for such SB2 stars. The present case was particularly favorable due to the brightness of the object.

(*) The line broadening is modeled by a rotational profile even if it may be due to other phenomena beside the stellar rotation (e.g. macro turbulence).