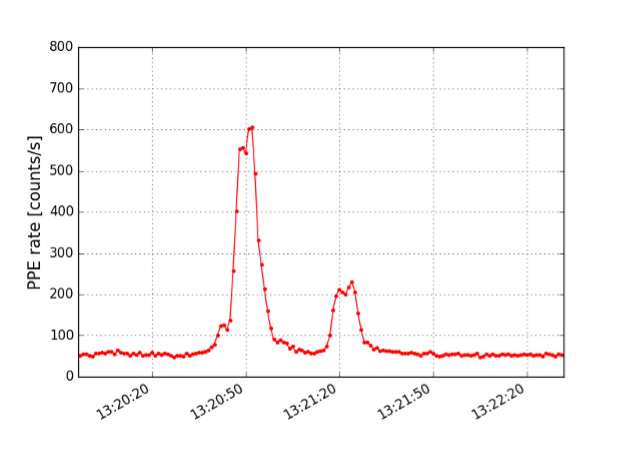 Figure 1. On 9 October 2022 a mysterious double peak signal was observed in the particle rates measured by Gaia. This graphic shows the arithmetic mean of the particle rates calculated from the data acquired by 14 skymapper CCDs. Credits: ESA/Gaia/DPAC - CC BY-SA 3.0 IGO. Acknowledgements: Ed Serpell

Gaia is the European Space Agency's astrometric mission to map the Milky Way galaxy in unprecedented detail. The spacecraft has no dedicated particle detection instrumentation but is however able to measure the particle flux at the focal plane by counting the ionization tracks due to the passage of charged particles.

On 9 October 2022 an unusual double-peak signal was observed in the reported particle rate, each peak had a duration of about ten seconds with a separation of thirty seconds between the centres of the peaks. Due to the timing and unusual characteristics of the event it is certain that Gaia detected a flux of secondary particles created by the passage of gamma-rays from GRB221009A through the spacecraft.

The Gaia focal plane consists of 106 CCDs with a total of nearly 1 billion pixels. Fourteen of these CCDs are allocated the task of identifying stars as they enter the fields of view due to the spacecraft rotation. From it’s operating position, Gaia is exposed to the flux of particles typical at 1 astronomical unit from the Sun which means that the images acquired onboard are polluted by the tracks of charged particles. 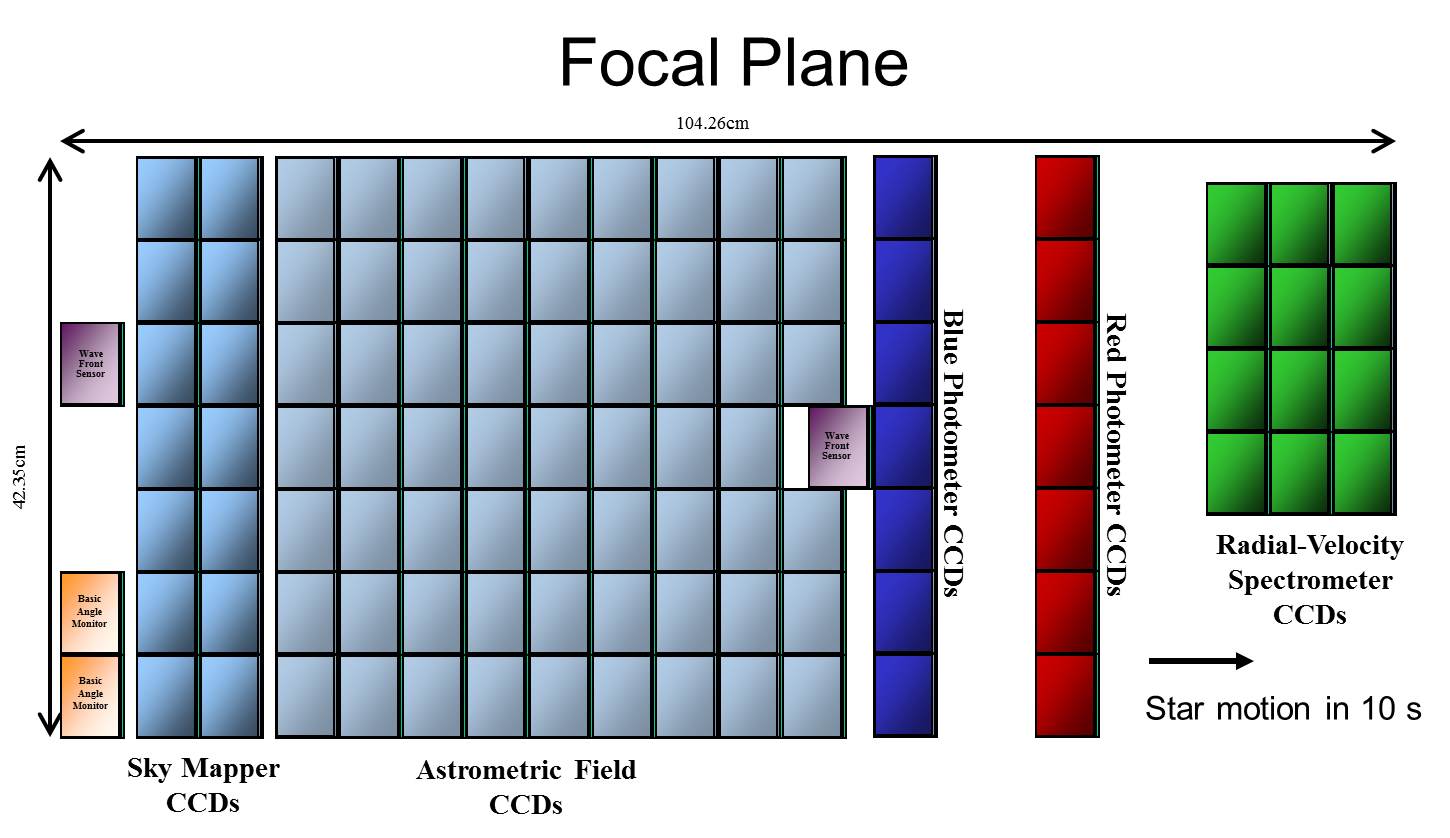 An important step in the onboard image processing is to identify these tracks in order to exclude them from the astrometric data. The Gaia software maintains cumulative counters of the particle tracks (known as prompt particle events, PPE) that have been identified in each of the sky-mapper CCDs and regularly transmits these values to the ground. Over many years of operations the PPE detection algorithms have proved themselves to be excellent particle detectors.

The particle counters are converted to rate measurements which are useful for assessing the radiation environment, for example at the times of unexpected anomalies. It has been possible to monitor the effects of the solar cycle on the galactic cosmic ray flux and also to measure the output from energetic solar events.

On 9 October 2022 an unusual signal was identified in the measured particle rates. This signal consisted of two peaks of 10 seconds duration separated by 30 seconds (see Figure 1). This signal had the Gaia team baffled for a few days because the rate of change was too fast for any normal charged particle signal. Additionally, the signals from energetic solar events are typically seen to have different amplitudes on different CCDs due to asymmetric shielding by the surrounding spacecraft structure. Again, the signal on 9 October 2022 was unusual, it was essentially the same on all CCDs. 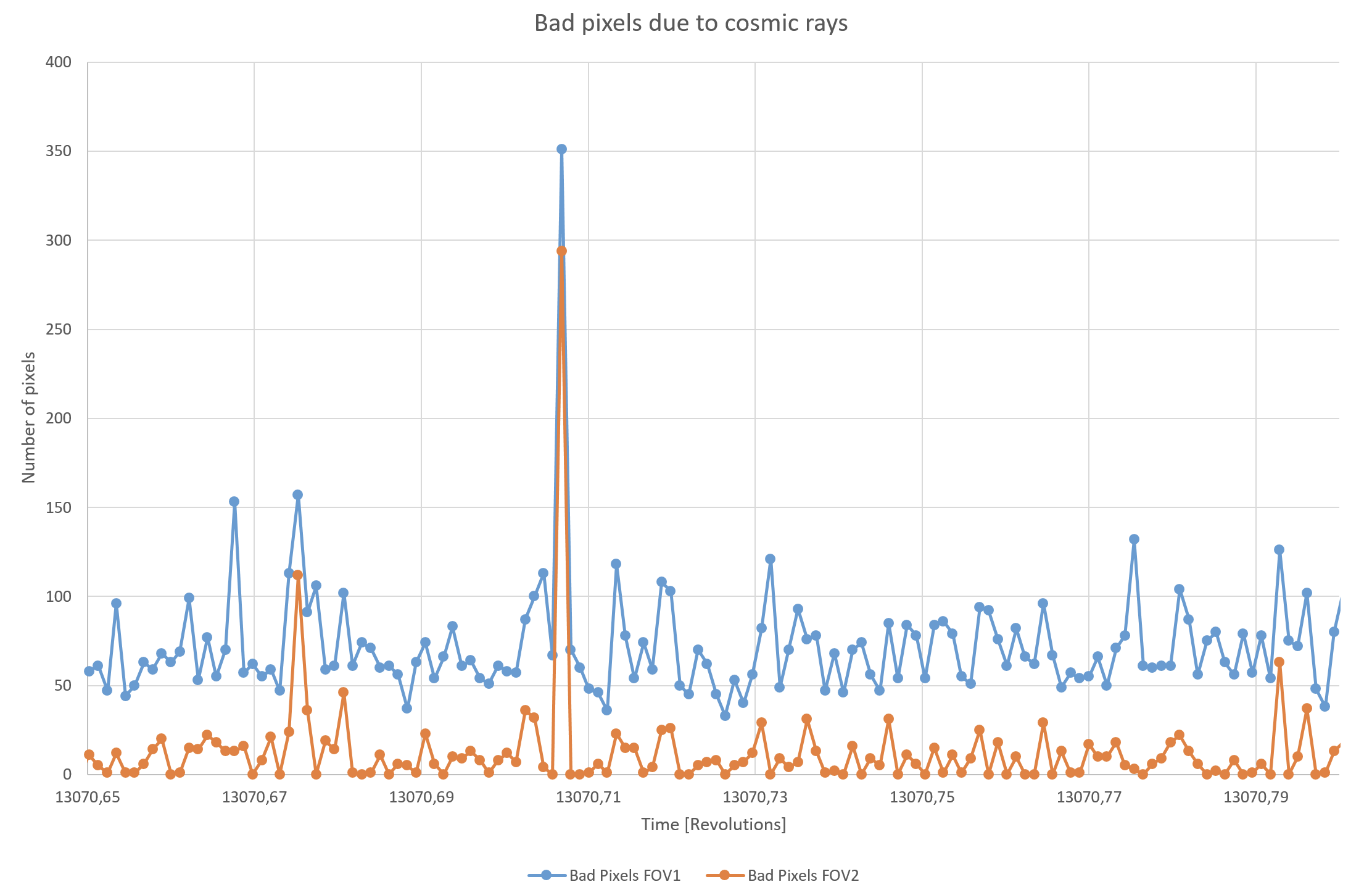 The investigation was extended to include analysis of the images from the basic angle monitoring (BAM) CCD. This CCD is dedicated to imaging the interference patterns made by the BAM laser beams. Unlike the astrometric CCDs these images are not processed onboard, instead they are sent in raw format to the ground. Of course the BAM CCDs are also exposed to the particle environment at L2 and so these images contain the tracks left behind by the passage of the charged particles. At the time of the mysterious PPE peaks the BAM CCD showed an enhanced number of particle tracks which confirmed that a particle event had occurred (see Figure 3, Figure 4). 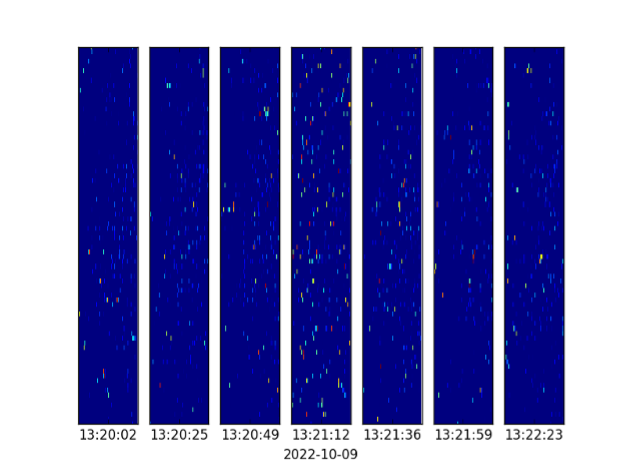 Figure 4. A series of BAM images, processed to remove the laser interference fringes, centred on the time of GRB221009A. It is easy to see that there was an enhanced number of particles in the central image. BAM images are integrated over 25 seconds where they accumulate ionising particle tracks, the timestamps are for the end of each integration period. Credits: ESA/Gaia/DPAC - CC BY-SA 3.0 IGO. Acknowledgements: Ed Serpell

Once the news about the observation of the biggest gamma-ray burst ever detected became public suddenly everything fitted into place, Gaia had seen a GRB! But how?

The Gaia CCDs are electron counting devices so somehow the gamma-ray photons from the burst have to create free electrons in the silicon to be collected and counted. At high energies it is possible for gamma-rays to have dramatic interactions with materials. One possibility is pair-production where a gamma-ray in close proximity to a nucleus can spontaneously convert into an electron and a positron. Another possibility is photodisintegration where a gamma-ray can be absorbed by a nucleus resulting in an excited but unstable nucleus which quickly relaxes by emitting some of its constituent protons or neutrons. In both of these interactions between gamma-rays and matter there are resultant energetic charged particles (positrons, electrons, protons) that go on to ionize the atomic electrons of the silicon and thus leave a measurable track.

The GRB221009A was so powerful that it was detected by multiple instruments throughout the solar system in many surprising ways (published in this story). The high fidelity Gaia data is available to aid scientists in their investigations of this unique and wonderful event.