Figure 1: The orbits of Gaia and the James Webb Space Telescope. Left: The distance in kilometers between the two spacecraft as function of time during the first two years of Webb’s stay at L2. The red line indicates the event of February 18. Center: The relative sizes and locations of the Gaia orbit (yellow) and the James Webb orbit (white). In this view the Earth is located to the left, not far outside the frame. Gaia’s Lissajous loops have the Lagrange point L2 right in their center, while the James Webb’s halo orbit loops on average are closer to Earth by about 100 000 km. Right: The observation geometry on February 18. The red line indicates the annual path of L2 around the Earth. The sizes and orientations of the two spacecraft icons are not realistic. Image credits: ESA/Gaia/DPAC, CC BY-SA 3.0 IGO.

In early 2014, ESA’s space astrometry spacecraft Gaia arrived at its working place near the Earth-Sun Lagrange point L2, about 1.5 million km from the Earth and always in the direction opposite to the Sun. Almost exactly eight years later, in late January 2022, the James Webb Space Telescope took its station at L2, where the combined gravitational attraction of Earth and Sun allow spacecraft to follow their home planet Earth around the sun, for several years and with almost no fuel expenses.

Already a few weeks before that arrival, some Gaia experts realised that during Gaia’s continuous scanning of the entire sky, its new neighbour at L2 should occasionally cross the fields of view of Gaia's telescopes. A quick back-of-the-envelope calculation showed that it might be bright enough – as seen from Gaia – to be automatically detected by the on-board measuring algorithms. Every six hours, Gaia scans a narrow 360-degree strip around the entire celestial sphere. The successive strips are slightly tilted with respect to each other, so that every few months the entire sky is covered by them – touching everything that’s there and that’s bright enough to be seen by Gaia, including about two billion stars, and hopefully also the James Webb.

As soon as the operational orbit of Webb became sufficiently well known, specific predictions could be calculated. It turned out that the two spacecraft would always be quite far from each other – between 400,000 and 1,100,000 km apart (see Figure 1) – but that dozens of such photo shooting opportunities would arise over the remaining 3 to 4 years lifetime of Gaia. Due to the permanently large separation between the two cousin observatories, it was clear from the beginning that the Webb spacecraft would invariably just be a tiny, faint speck of light in Gaia’s telescopes without any details visible. But wouldn’t it be nice anyway? A real first in the history of scientific spaceflight: One great observatory capturing a completely unrelated second one, both in their operational locations, both far out in space, both not near any planetary surface.

The first such event was predicted to occur on 18 February 2022 already, and it was foreseen to be an unfavourable one: The separation turned out to be 1.02 million kilometers - almost the maximum possible - and the viewing angle towards Webb’s huge sunshield to be almost edge-on. Very little reflected sunlight was expected at Gaia. The scientifically bright Webb observatory for once would look very dim.

Furthermore, Gaia is not designed to take real pictures of the two billion celestial objects that cross its fields of view. Instead, it is supposed to collect very precise measurements of positions, motions, distances, colours, etc. – and to send the minimum amount of data to the ground that just allow these measurements to be extracted. However, one part of the instruments on board actually takes a sort of sky images. It is the “finder scope” of Gaia, technically called the Sky Mapper. At a millisecond cadence, it successively records slices of the narrow 360-degree strip around the celestial sphere that are scanned by Gaia every six hours. Within seconds, these slices are automatically scrutinised for star images, the positions of which are then used to predict when and where those stars could be recorded in Gaia’s main scientific instruments. Afterwards, almost all of those image data are immediately deleted while still in the onboard computer. Only tiny “windows” (around the detected stars) are kept and transmitted to the ground stations. But the computer can be requested to exceptionally keep a stretch of the image data. This facility was originally planned for technical servicing purposes mainly. But during the mission it has also found some scientific uses. Why not use it for a snapshot of Webb? 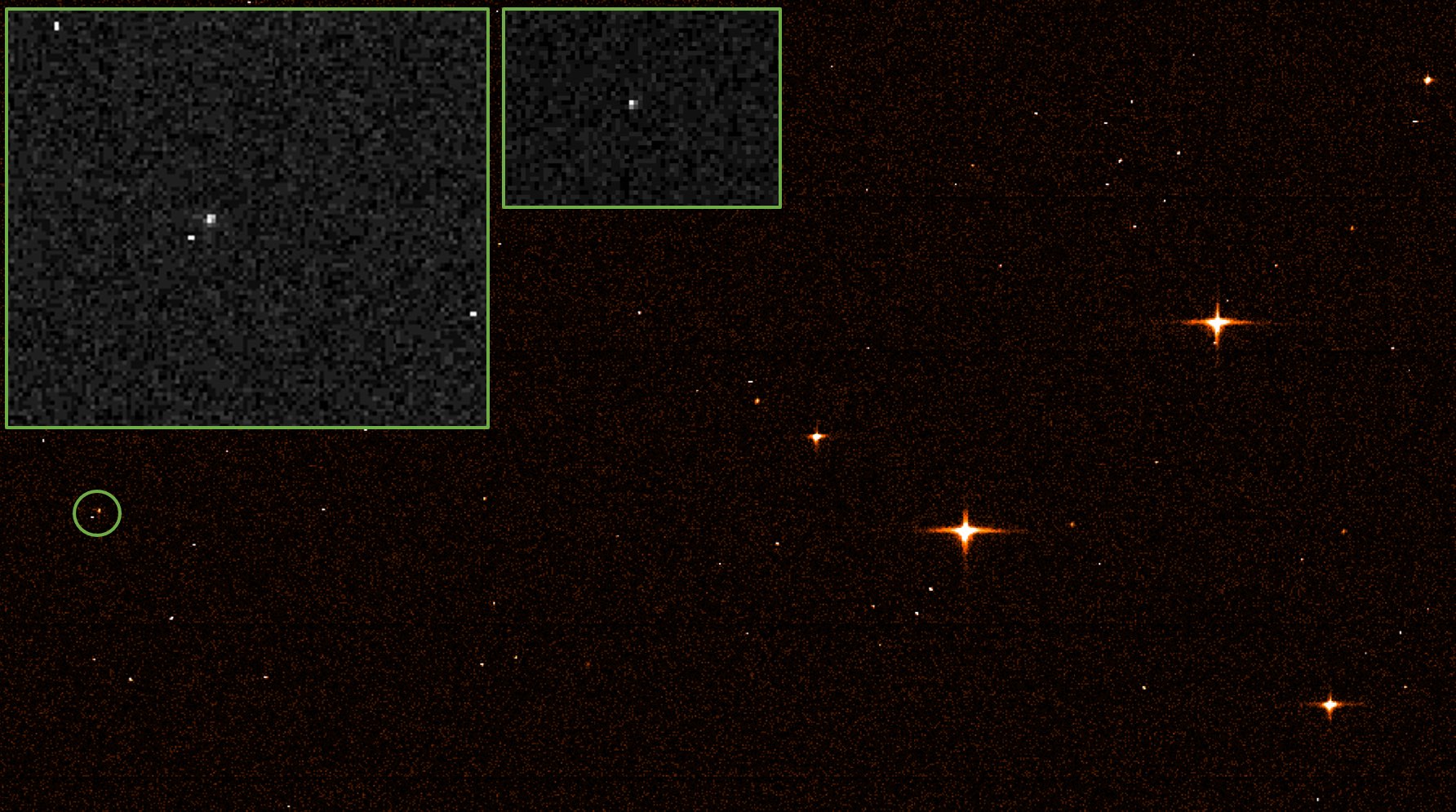 Figure 2: Images of the James Webb Space Telescope taken by ESA’s Gaia observatory on February 18. Background frame: Cutout of the specially recorded image from Gaia’s Sky Mapper instrument at the first of the two observations. The reddish colour is artificial, chosen just for illustrative reasons. The frame shows a few relatively bright stars, a number of faint stars, a few disturbances – and a spacecraft! It is marked by the green circle. Large grey inset: Zoom into the frame showing the James Webb image at full Sky Mapper resolution. It is the slightly extended speck of light in the centre. The other three bright dots are traces of energetic cosmic-ray particles which hit the CCD chip during the 2.5 seconds of exposure. The on-board software is capable of autonomously and reliably distinguishing the vast majority of these from star images. The small rest is subsequently eliminated in the ground processing. Small grey inset: The second “photo” of James Webb, taken in the second field of view of Gaia’s telescopes about 106.5 minutes after the first one. Each of the two images was created by just under 1000 sunlight photons arriving from the James Webb spacecraft. More images: here. Image credits: ESA/Gaia/DPAC, CC BY-SA 3.0 IGO.

The proposal was quickly implemented by the Gaia Science Operations Centre, and resulted in the images shown in Figure 2. They have been recorded by the two telescopes of Gaia, with a separation of 106.5 minutes in time. Watching closely this image, an obvious question arises : How can we be sure that the tiny bright specks actually are the great James Webb Space Telescope?

This is explained by Figure 3. This is not an image, but a sky map of the area around the predicted locations of James Webb on the Gaia sky during the two passages of 18 February 2022. All the spots in this map denote the celestial positions of star images automatically detected and measured by Gaia while scanning that sky area on that day. Their size approximately indicates their recorded brightness. The centers of the two small circles denote the predicted location of James Webb at the two instants of observation.

So, ESA’s Gaia observatory indeed captured its joint NASA/ESA/CSA cousin, the James Webb Space Telescope, at the very first such occasion. And it will do so again and again. But these other occasions will never rival the special flair of this first one – as likewise every true first in life has a special meaning.

Figure 3: Left: Reference map of a small sky area surrounding the expected positions on 18 February 2022 of the James Webb Space Telescope, marking the positions of the stars as available in Gaia's Early Data Release 3. The centres of the two circles indicate the computed positions where James Webb should be seen with Gaia. The size of the field shown is 0.4 degrees, just a bit smaller than the apparent diameter of the full moon as seen from Earth. The size of the disks is indicative of the sources brightness.
Center: Map of the same sky area captured by Gaia on 18 February 2022, once in each of its two fields of view. The images of the James Webb appear within the predicted areas as a 19.3 magnitude star-like source. This map was produced from Gaia's routine, fully autonomous on-board object detection scheme; it does not make use of the special images recorded for Figure 2. It contains all the on-board detections, including moving objects and a significant fraction (~10%) of spurious detections, not associated to a source in the sky, but due to cosmic hits or other electronic glitches and CCD leaks. All these are filtered out later in the processing. The curious chain of white dots at the left for example is due to the straylight from the star Xi Tauri which is slightly west of the shown field of view here.
Right: Both images combined in a GIF. Image credits: ESA/Gaia/DPAC, CC BY-SA 3.0 IGO.

This animation illustrates the orbits of the Gaia space telescope and the James Webb Space Telescope. Since 24 January 2022, the James Webb Space Telescope is in a halo orbit around the Lagrange point L2, about 1.5 million kilometres from Earth. In the same region of space, the Gaia space telescope has performed its measurements since July 2014, orbiting L2 in a Lissajous orbit. On Friday 18 February 2022 at 08:53 and 10:38 CET, the James Webb observatory has been seen through Gaia's telescopes for the first time. Due to Gaia's continuous scanning of the sky this will happen again in the future - several dozen times over the next few years. A version of this animation with an artificial voice added is available here. Visualisation credits: ESA/Gaia/DPAC - CC BY-SA 3.0 IGO. Acknowledgements: François Mignard, Toni Sagristà Sellés, Stefan Jordan, Ulrich Bastian, José Hernandez, Uwe Lammers. Video created with Gaia Sky (developed by Toni Sagristà), edited by Stefan Jordan. 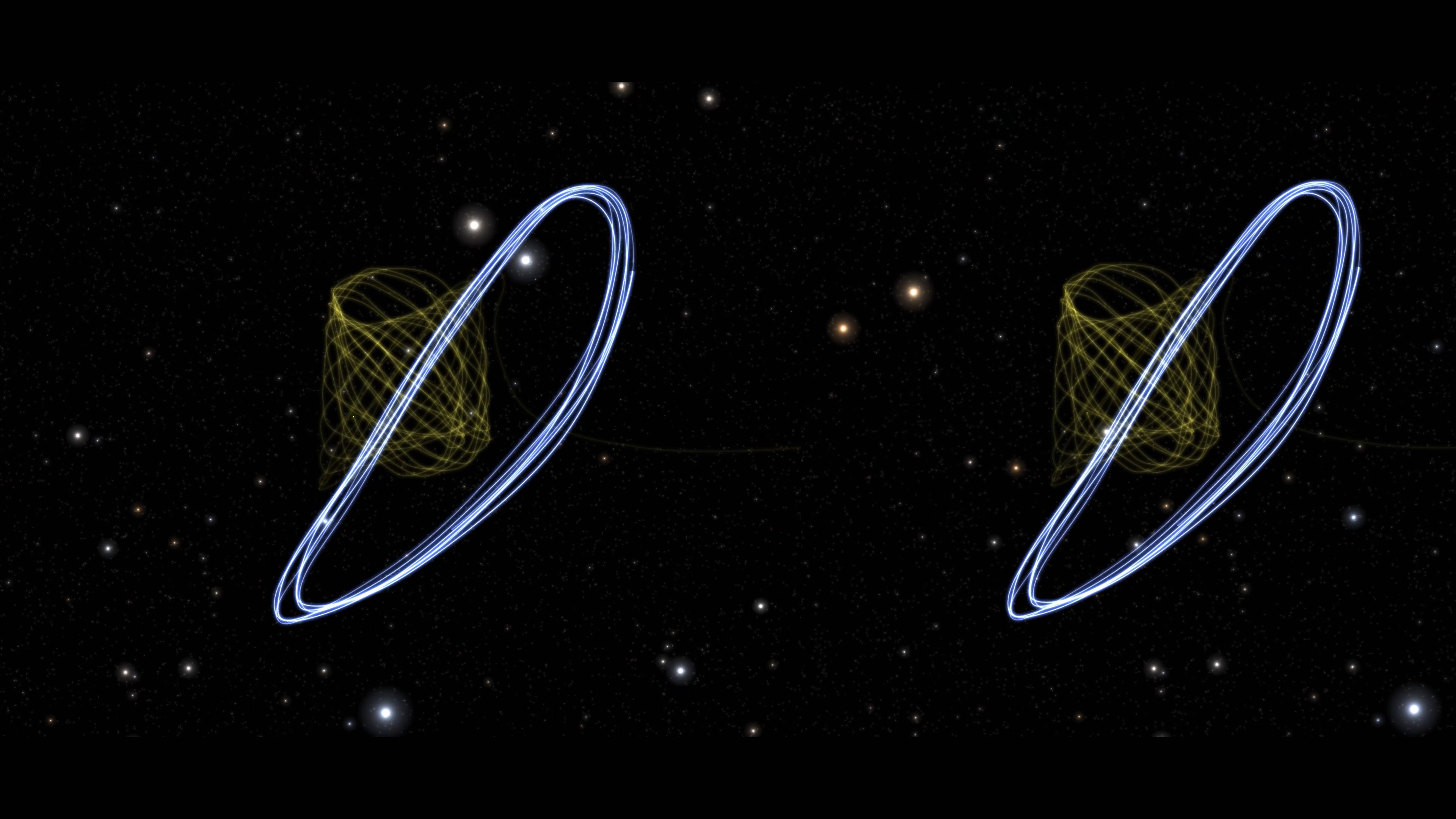 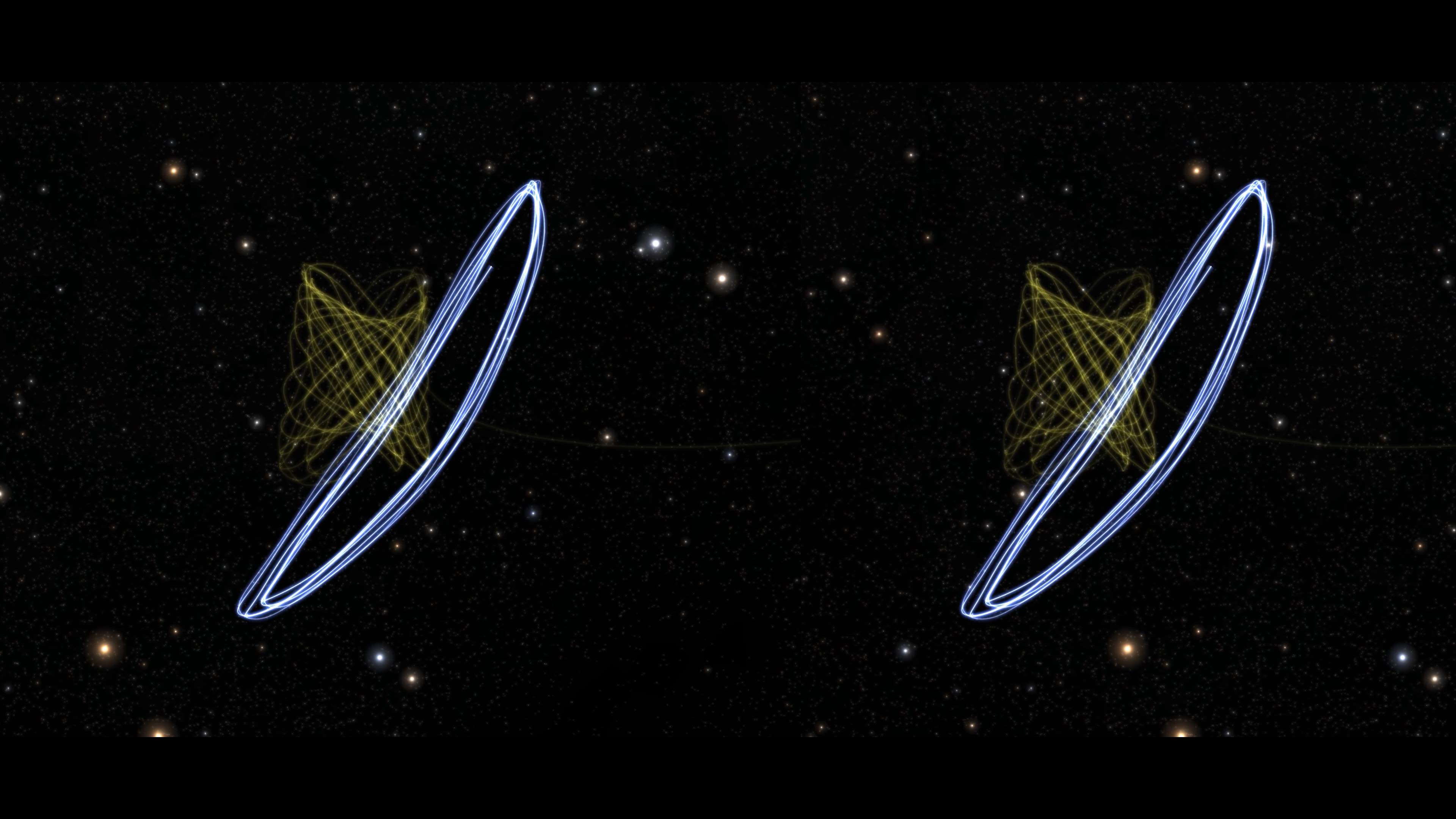 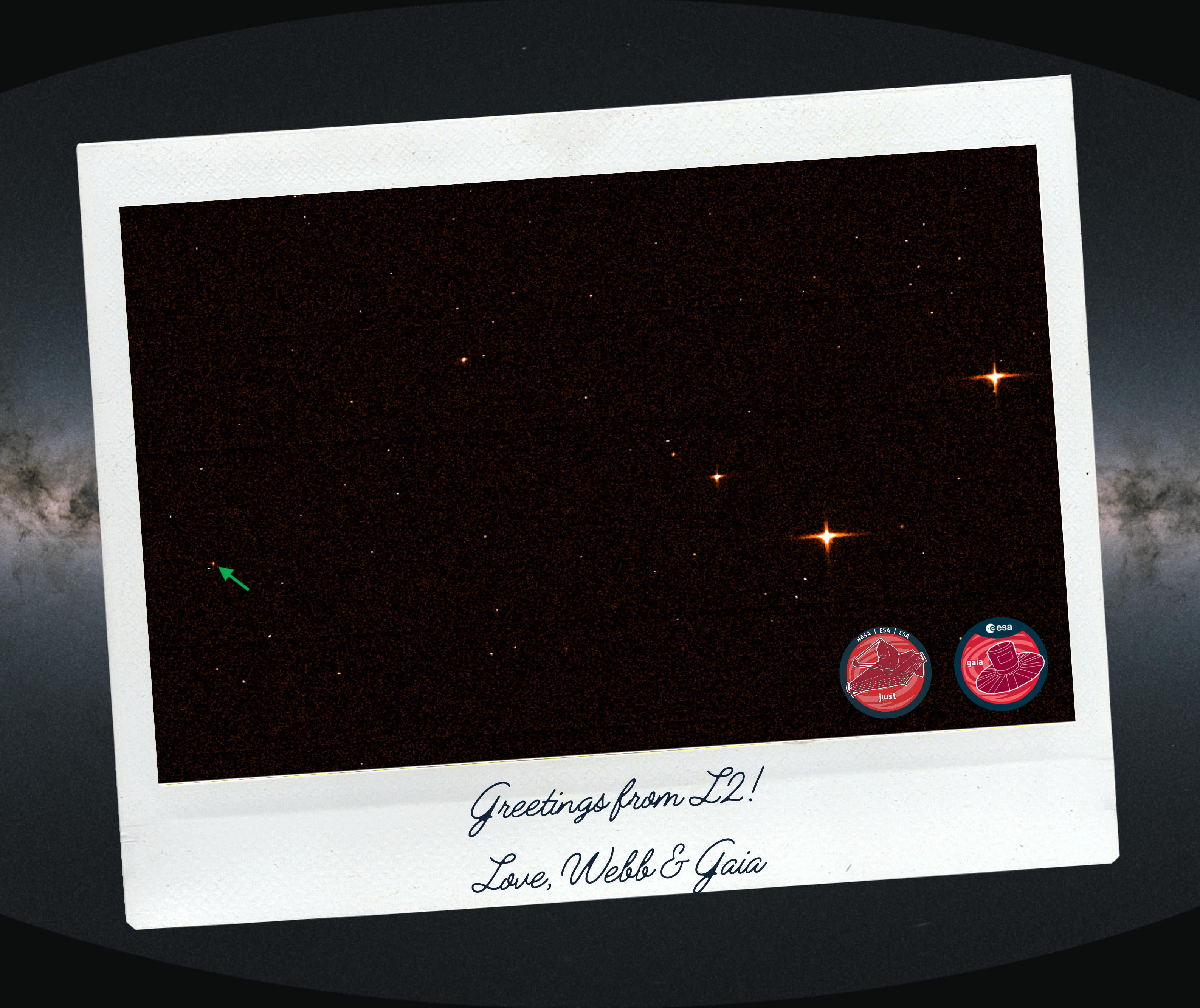