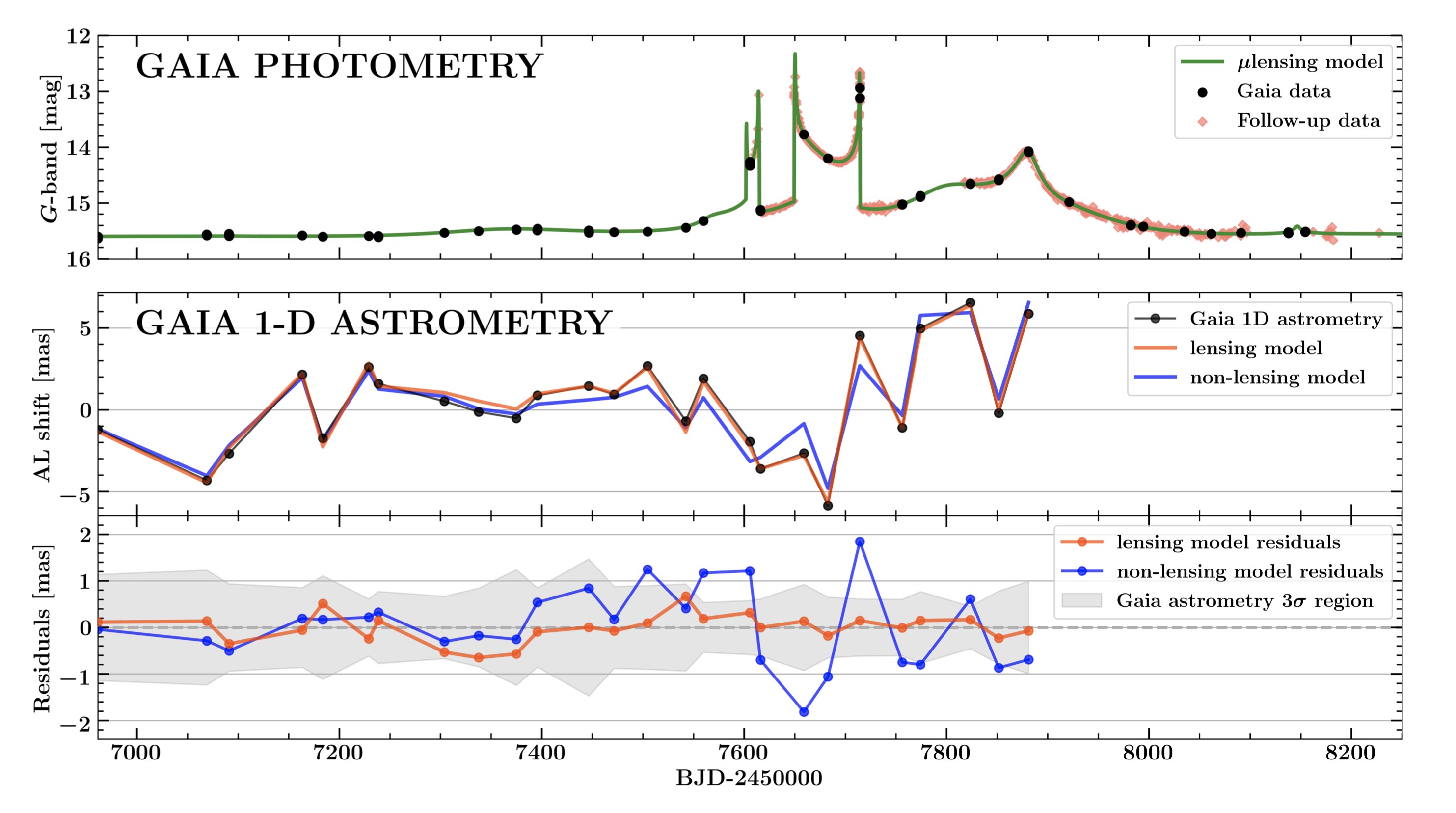 An overview of the Gaia data for the Gaia16aye microlensing event. Top panel shows the photometry from the Gaia Photometric Science Alerts (black points) along with the follow-up observations (salmon points). Solid green line is the microlensing model which reflects the multiple spikes in the light curve caused by the rotating binary lens composed of two main sequence stars (Wyrzykowski et al. 2020). Middle panel: Gaia 1-D astrometric (black points) deviations from a mean position in milliarcseconds. Blue solid line is the standard 5-parameter astrometric model. Red solid line is the astrometric model which also includes the motion of the centre of light of microlensed images caused by the binary lens. Bottom panel: residuals of the two astrometric models presented on the middle panel. Astrometric microlensing signal is clearly present in the Gaia data and coincides with the spikes seen in the photometry. On the X-axis is shown the time in days. Credit: ESA/Gaia/DPAC - CC BY-SA 3.0 IGO. Acknowledgement: ESA/Gaia/DPAC/CU7-CU3-CU4-CU5, Krzysztof Rybicki, Łukasz Wyrzykowski (Warsaw University).

Gaia16aye was a binary microlensing event detected by Gaia in 2016 as one of the first transients of that kind reported by Gaia Photometric Science Alerts (Hodgkin et al. 2021). The event has been followed-up from the ground by a network of telescopes over the period of two years (see our image of the week story of october 2016 and the story featured on sci.esa.int). Dense coverage and exquisite photometric data revealed in very detail numerous features in the light curve, which could be reproduced by a microlensing model employing full Keplerian motion of a binary system composed of two Main Sequence stars (Wyrzykowski et al. 2020).

During a microlensing event the light of a background star (source) is split into multiple images due to the gravitational influence of a foreground object (lens). The angular size of the images is larger than the unlensed source and the surface brightness is preserved. Thus, the total flux during the event is increased. The individual images are hard to resolve as their separation is of order of 1 mas. Though this is much smaller than the resolving power of Gaia (which would actually require a telescope aperture of at least 60 m), it can however measure the centroid of the combined light with sub-mas precision.

In case of a single lens, the smaller projected lens-source separation on the sky, the larger the amplification, hence the source getting brighter. In a binary lens, there are more regions of high amplification, called caustics. When the source crosses the caustic, its amplification jumps dramatically, often by many magnitudes. In Gaia16aye there were multiple jumps due to rotation of the system of caustics, caused by the rotation of the binary lens system.

Crossing a caustic also means appearance or disappearance of additional images. This causes a dramatic change in the position of the centre of light.

Gaia has been observing the source star of Gaia16aye since 2014, collecting not only photometric measurements (which led to the alert on the anomalous increase of brightness, upper panel of the image), but also the positional astrometric data. The high precision Gaia astrometric measurements are one-dimensional along the scanning direction. Due to the movement of Gaia’s spin axis (precessing around the Sun at 45 deg angle every 63 days), the scanning angle passing over a source is changing with time, allowing for measurement of 5 astrometric parameters (2D positions, 2D proper motions, parallax).

A portion of Gaia 1D astrometric data from Cycle 3 (until May 2017) for this microlensing event was investigated within DPAC, as part of a procedure of validating the epoch astrometry and preparation for the microlensing events detection pipeline. The data (shown in the middle panel) was obtained with a preliminary astrometric solution (AGIS 3.1). The blue line denotes the standard 5-parameter astrometric model. As can be seen in the residuals at the lowest panel, the blue model follows the data only at the very beginning, and departs significantly during the microlensing event.

The photometric model of this complex light curve contains all the information about the microlensing event apart from one - the size of the Einstein Radius, which is the angular scale of the microlensing event and the radius of the ring-shaped image that would form in an ideal case of perfect alignment of the point source, point lens and the observer. In case of Gaia16aye it was eventually measured thanks to the detailed photometric coverage of the caustic crossings captured by follow-up observations (salmon markers in the top panel of Figure 1). This allowed measuring the size of the source in the units of Einstein Radius, which in turn was compared with the physical size of the source as measured from source colour and spectroscopy. But if there was no caustic crossing present, like in case of single lensing, the Einstein Radius would be the missing crucial bit of information which allows us to compute the mass of the lens, hence tell anything on its nature.

The shift of the centroid of light affected by microlensing is a linear function of the Einstein Radius. Combining the knowledge of the binary system from photometry with the astrometric Gaia data yielded an independent determination of the value of the Einstein Radius in Gaia16aye. The 6-parameter astrometric model that include lensing (with Einstein Radius) is shown as a red line. The uncertainty of the data is shown as a grey band in the residual plot. Now we are finally able to reproduce Gaia 1-D astrometric measurements correctly! The value of the Einstein radius derived from Gaia astrometry is also in perfect agreement with the one derived from photometry and is about 3 mas.

Microlensing events in their classical photometric form have been being detected for over 30 years now and tens of thousands of events were found. However, their astrometric signature has not been so easily detectable and so far only a couple of detections were made in extreme cases using Hubble Space Telescope or ESO/VLTI. Here we see a foretaste of Gaia’s capability to provide astrometric time-series for all microlensing events which occur during its operations (e.g. Rybicki et al. 2018, Kluter et al. 2019). This method gives direct access to the mass of lenses for fairly standard events, including ’invisible’ lenses like neutron stars and stellar black holes.

The animation, available here, illustrates the motion of the source, the binary lens and the caustics as well as the trajectory of the centre of light.

Time evolution of the Gaia16aye microlensing event, with the "data representation" on the left and more intuitive "geometric representation" on the right. The light curve (top left) shows how the source brightness has been changing during the event. Middle panel contains the one-dimensional (in the direction of Gaia scanning motion) offset of the light centroid from the reference position, along with residuals. Majority of the centroid motion is due to parallax and proper motion of the source star (blue model), but these two effects do not describe all the data properly. The impact of astrometric microlensing is relatively small, but clearly visible, especially on the residuals panel (bottom left), which shows both lensing (red) and non-lensing (blue) models, with respect to the data. The non-lensing model fails to reproduce the Gaia measurements especially during the caustic crossings, where the light centroid position changes vastly due to strong variations in the configuration of the source images. Since Gaia astrometry is one-dimensional, it is difficult to imagine the geometry of the event using only the astrometric data presented on the left. We reinforce the readers imagination with the right panel, which shows the trajectory of the source (dashed, blue line), the light centroid (red) and orbital motion of the lensing system, along with the caustic (dark gray) that gradually changes its shape and rotates due to the motion of the lens' components. Black filled circles mark epochs of Gaia astrometric measurements. Trajectories shown on the right panel are relative to the mass center of the lensing system. The light green vertical line on the left panels marks the ongoing epoch displayed on the right, to help indentifying what is happening during the event and navigate between the "data representation" and "geometric representation". For example, one can easily see the critical changes happening during caustic crossings - whenever the source trajectory intersects with the caustic, one can see the flux spike (top left panel), but also a stronger astrometric deviation (bottom left).