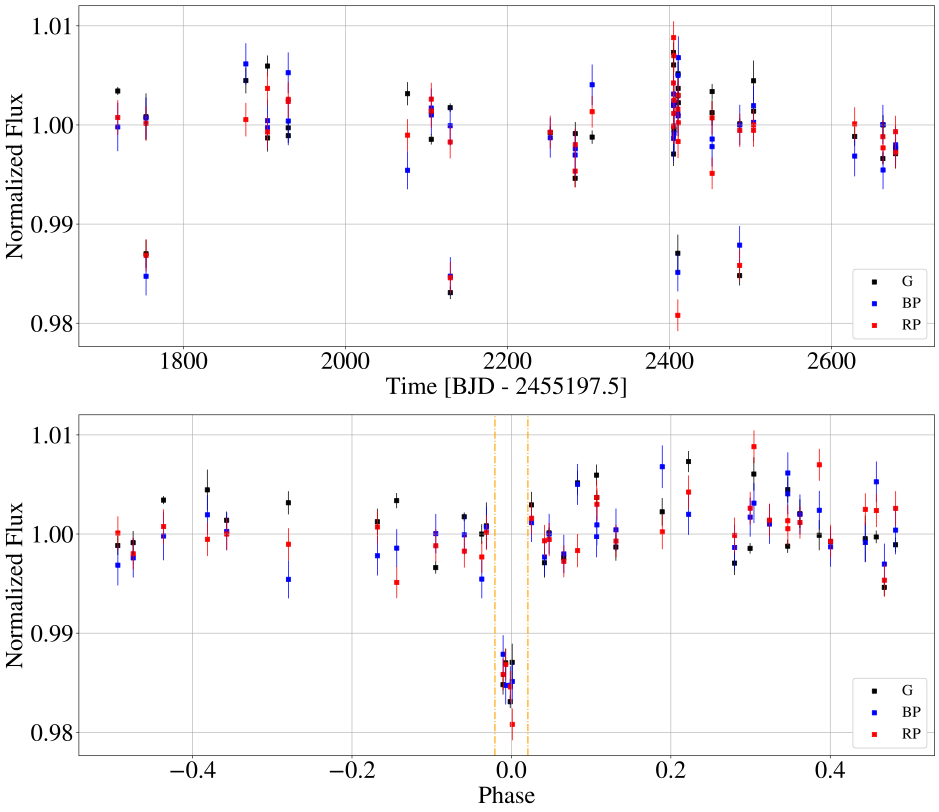 Gaia is sampling more than a billion Milky-Way stars at a mean rate of 15 times per year. The Gaia scanning law was optimised for obtaining precise astrometry and is therefore not optimal for detecting planets that transit periodically the disk of their host stars. Nevertheless, this type of events can in principle be seen in the Gaia data. In the past, Gaia has already managed to capture transits of exoplanets that had been discovered before by other instruments.

Presented here now is the first transiting planet actually detected by Gaia, using data collected during the first 34 months of operation. The host is the solar-type star Gaia EDR3 3026325426682637824. The upper panel of Figure 1 shows the photometric time series data that Gaia collected for this star. The plot shows the samples in all three bands – G, BP and RP – as flux normalized to the stellar nominal flux in each band. One can easily see four dimming events of about 1.5%.

Analysis performed by DPAC/CU7 team in search of exoplanetary transits looks for periodic dimming events, using the Sparse BLS method (Panahi & Zucker 2021, PASP, 133, 024502). Once such dimming events occur, their period, duration, and depth are estimated, and checked whether they can be physically explained by the presence of a planet.

Transiting planets are not the only physical scenario that can cause such dimming events. The object that blocks the stellar light might, in principle, also be a brown dwarf – a faint substellar object with a mass larger than a planet mass, but of similar size (radius). In fact, even very low-mass stars might have a similar radius. In order to establish the nature of the transiting object beyond reasonable doubt, radial velocities (RV) have to be measured, which would betray the wobble of the star caused by the transiting object. The size of this wobble would reveal the mass of the transiting object, and thus its nature. Gaia RVs can sometimes be used to detect wobble caused by stellar companions, but they are not precise enough to detect the effect of planetary companions.

Once the periodic transits shown in Figure 1 were detected, the teams involved had to make sure that they were indeed caused by a planet, in order to validate the CU7 exoplanetary transits pipeline and assess its reliability in detecting bona fide Gaia transiting exoplanets. Observing time on the Large Binocular Telescope (LBT) observatory in Arizona (US) was applied for, to use the high-resolution spectrograph PEPSI (PI Klaus Strassmeier) in order to measure RVs of the host star. The LBT Observatory is an international collaboration among institutions in the United States (UA and OSU), Italy (INAF) and Germany (LBTB), and observing time was obtained through the Italian Director’s Discretionary Time (DDT) program. The spectroscopic observations of this target were secured, leading to nine high-quality spectra, between December 23rd, 2020 and January 18th, 2021. The velocities were obtained by cross-correlating the observed spectra against a synthetic PHOENIX spectrum, using the new SPARTA code.

Figure 2 presents the RVs obtained, together with a best-fitting Keplerian RV curve, taking into account both the RVs and the photometry, using the Juliet code. The velocities are easily seen to match a Keplerian circular RV curve, with a semi-amplitude of K=192+/-17 m/s. 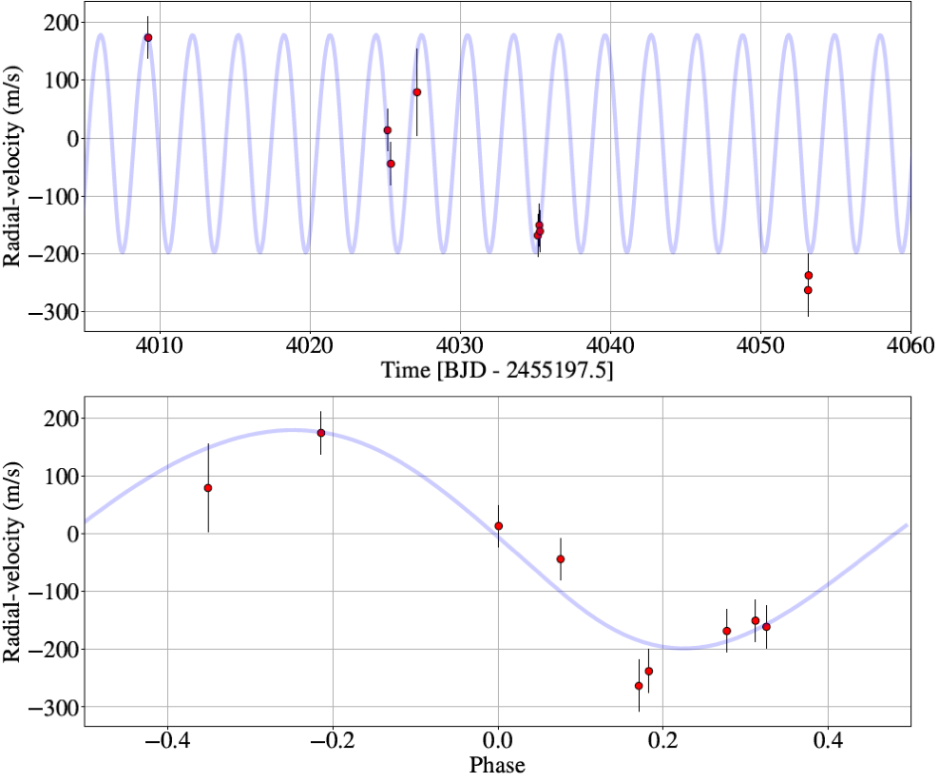 Figure 2: Upper: The radial velocities of the candidate, as measured by LBT/PEPSI. The blue line represents the RV Keplerian solution. Lower: the same data, phase-folded according to the planet estimated orbital period.

The combined solution finally confirms that the transiting object is a Jovian planet, with a mass of 1.1+/-0.1 MJ. Using the combined information from Gaia and PEPSI, we can therefore safely announce the first detection of an exoplanet by Gaia, using the transit method. On January 2021, Olmschenk et al. confirmed our findings by noticing similar photometric variations of the star in the data of NASA’s TESS telescope. More candidate transiting planets like this one are waiting for their detailed analysis. They will be published separately as public CU7 variability announcements that will be available for follow-up observations by the broad astronomical community.