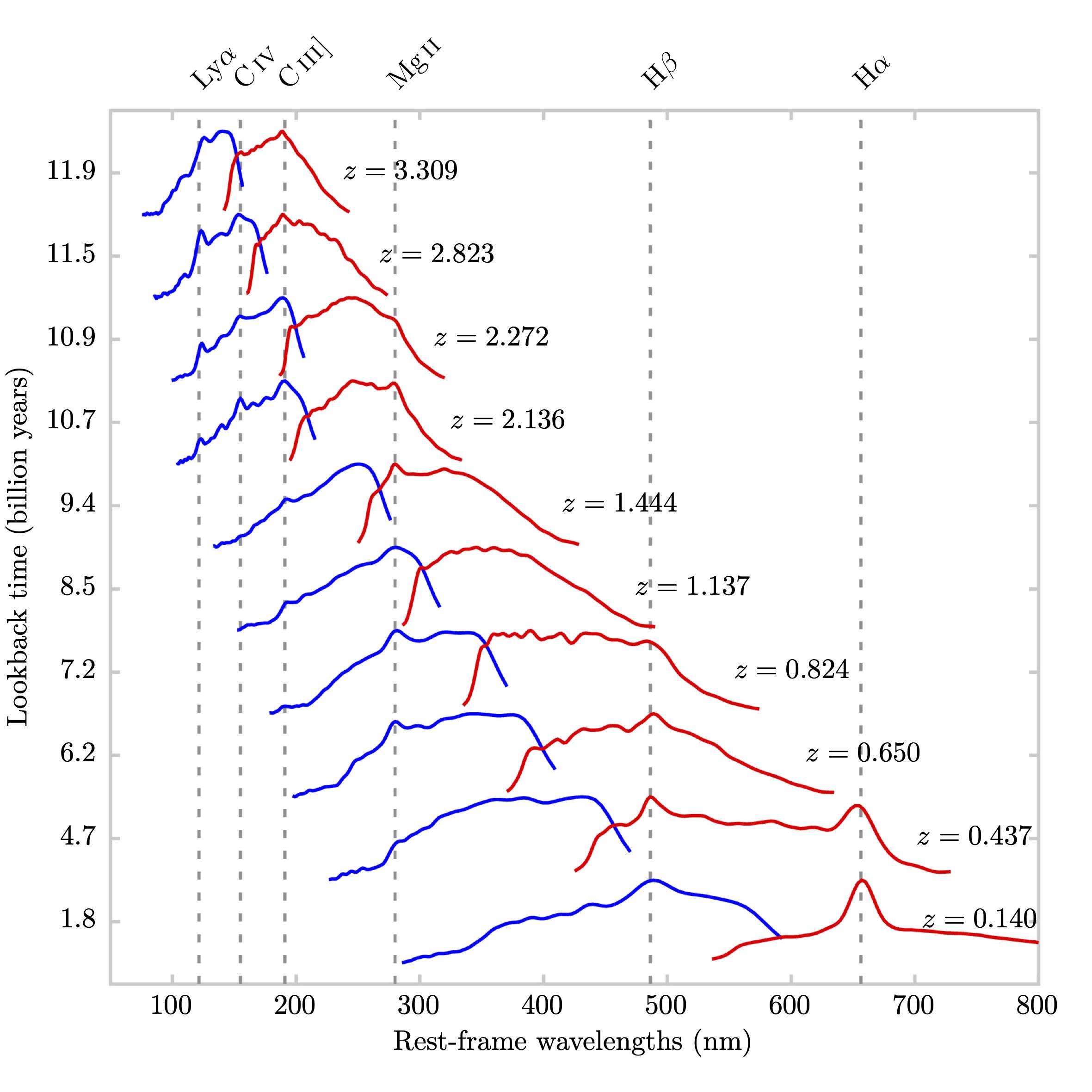 Gaia low-resolution BP and RP spectra (blue and red, respectively) of ten known quasars selected with apparent G magnitudes between 17 and 18. The QSO spectra are plotted in their rest-frame – the wavelengths corrected for the expansion of the Universe. The estimated redshift values from the DPAC Apsis/QSOC pipeline were used, as indicated on the right side of each source. In this wavelength system, some major emission lines of the QSOs align and correspond to well-known elements that are indicated by the dashed lines. From the redshift estimate, also indicated is the lookback time, which tells us how long ago the light from a quasar was emitted in our direction. Image created by Ludovic Delchambre, René Andrae, Morgan Fouesneau, Orlagh Creevey, Rosanna Sordo.

The Gaia mission’s primary objective is to measure the parallaxes and proper motions of stars in the Milky Way. Yet, Gaia also relies on very distant objects to define its reference frame. In fact, Gaia also sees several millions of distant galaxies and in particular quasi-stellar objects, or quasars (QSOs). Along its journey through the cosmos, the light from distant quasars encounters a wavelength elongation that is due to the expansion of the universe. As a consequence, the emitted light appears redder and covers a more expanded wavelength range than when it was initially emitted, billions of years ago.

QSOs are believed to be powered by the accretion of matter onto massive black holes at the centers of galaxies, a process that emits more energy than thermonuclear reactions. Quasars are amongst the most luminous objects in the universe and the most important tracers to study the accretion history of supermassive black holes, the early structure formation, and the history of cosmic reionization.

However, finding and characterising QSOs is extremely challenging because of their low spatial density and high contamination rate from Galactic objects. The Gaia Data Processing and Analysis (Coordination Unit 8) Astrophysical Parameters Inference System (Apsis, 2013A&26A...559A..74B) analyses the observations from the blue and red spectro-photometers of most of the objects seen by Gaia, the so-called low-resolution BP/RP spectra. In particular, Apsis identifies sources with high probabilites of being quasars and estimates their cosmological redshift with its QSOC module (2018MNRAS.473.1785D).

The figure shows ten known QSOs from the SDSS DR12Q (2017A&26A...597A..79P) and 2QZ (2004MNRAS.349.1397C) catalogues selected with apparent G magnitude between 17 and 18 magnitude that were successfully analyzed by QSOC (∼80% of the total number of QSOs in this magnitude range). This figure illustrates the quality of the Gaia low-resolution BP/RP spectrophotometry, which in this case enables us to estimate the spectroscopic redshifts of QSOs. All selected QSOs exhibit several strong emission features at the rest-frame wavelengths where they are expected, regardless of redshift and despite the low resolution and broad line-spread function of the BP/RP spectrophotometry.

As Gaia observes higher redshift QSOs, they can also appear dimmer because they are more distant. As a result, their BP/RP spectra become noisier and almost all spectral features are washed-out except for the very strongest emission lines (H-alpha and Ly-alpha), which still suffice for QSOC to remain capable of estimating their redshifts. Through the redshift effect, scientists can estimate the lookback time – how long it took the photons emitted from the QSO to travel through the intergalactic medium towards Gaia – providing us with “pictures” of the Universe as it was billions of years ago. QSOs pushed back the limits of the observable universe significantly in both distance and lookback-time.

In Gaia Data Release 3 – planned for the first half of 2022 – Gaia's Coordination Unit 5 will publish millions of low-resolution spectra all across the sky and Gaia's Coordination Unit 8 will provide us with their associated object classification and astrophysical parameters from Apsis, which include these QSO redshifts (see Gaia target release scenario).

The results presented above have been derived from the DPAC/CU8 Apsis analysis of the BP/RP spectra processed by DPAC/CU5. Determining the QSO classification and redshift parameters is the task of DPAC Coordination Unit 8 (CU8) responsible for the “Astrophysical Parameters”. CU8 uses all data available from the Gaia space telescope – astrometry, optical spectrophotometry, and near-infrared spectroscopy – to characterize the observed extragalactic objects (and stars). The DPAC Coordination Unit 5 (CU5) deals with the processing of the spectrophotometry – the low-resolution (R∼80) optical spectra of sources that encode key features such as the Lyα or Hβ emission lines.

Credits: ESA/Gaia/DPAC, L. Delchambre, R. Andrae, M. Fouesneau, O. Creevey, R. Sordo, and all of Coordination Unit 5 and 8 (CU5/CU8) of Gaia DPAC. We wish to thank the Gaia Data Processing Centre at the Institute of Astronomy in Cambridge (DPCI) for producing the high-quality spectrophotometry and Centre National d’Etudes Spatiales (CNES; DPCC) upon which this work rests.