Observation of a long-predicted new type of binary star 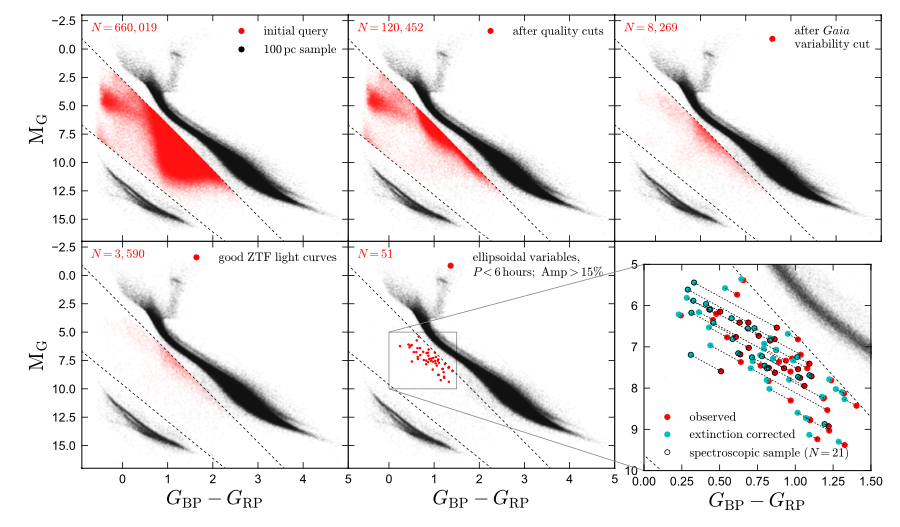 Selection of the sample in the colour-magnitude diagram. This sequence of images shows the various steps undertaken to clean the sample before pursuing a follow-up of the most interesting sources. As a comparison, the 100 pc sample (the Gaia Catalogue of Nearby Stars) is given which is shown in black. From top left to right bottom the selection is done as follows: 1. The inital query is given. 2. Quality cuts are applied. 3. Only the variable stars are kept using the Gaia variability classifications. 4. The sample is cross-matched with ZTF  and a quality cut is done on the ZTF light curves. 5. Selection of the ones that show a large-amplitude ellipsoidal variability and an orbital period below 6 hours. 6. A correction for the extinction is performed. Credit: Kareem El-Badry, et al. 2021 MNRAS

By combining data from different surveys and organising follow-up observations of selected candidates, a team of researchers has observed a new type of binary star that was long predicted to exist. The discovery finally confirms how such a rare type of star in the universe forms and evolves. The results have been described in Monthly Notices of the Royal Astronomical Society in the paper "Birth of the ELMs: a ZTF survey for evolved cataclysmic variables turning into extremely low-mass white dwarfs" by Kareem El-Badry et al.

The type of binary star being pursued by these researchers is a pre-extremely low mass (ELM) white dwarf, also referred to as an evolved cataclysmic variable. This is a transitional binary star that forms the connection between the Cataclysmic Variables and the Extremely-Low Mass White Dwarfs. It was theorized that the only way for an extremely low mass white dwarf to form is with the help of a binary companion. The idea being that the ELM white dwarf lost its outer envelope due to the gravitational pull from the companion star.

So far, astronomers observed both cataclysmic variables as well as ELM white dwarfs with normal white dwarf companions. However, it is the first time that also the transitional phase in between these two is observed: the moment the star has lost most of its mass and has nearly contracted to an ELM white dwarf. 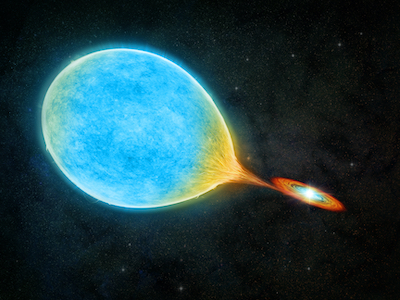 Artist's depiction of a new type of binary star: a pre-extremely low mass (ELM) white dwarf. Pictured in blue, the star is losing mass to a white dwarf companion and transitioning to an ELM white dwarf. Credit: M. Weiss/Center for Astrophysics (Harvard & Smithsonian)

The combination of Gaia's Early Data Release 3 with data from the Zwicky Transient Facility (ZTF) forms the basis of this research paper. El-Badry et al. started with an initial query to the Gaia Archive, applied some quality cuts and extracted only the stars which show variability (as found from Gaia photometric uncertainty/variability diagnostics). Then, El-Badry et al. combined this sample with data from the ZTF and also on the ZTF side, cleaned up the sample using quality cuts and then did a further selection on variability parameters, hence narrowing down the sample to 50 potential candidates.

Kareem El-Badry emphazises the importance of public data from astronomical surveys for his work: "If it weren't for projects like the Zwicky Transient Facility and Gaia, which represent a huge amount of work behind the scenes from hundreds of people, this work just wouldn't be possible", he says.

Of the 50 candidates, 21 were followed-up by obtaining multi-epoch spectra using the Shane telescope of the Lick Observatory. The follow-up observations of these 21 candidates was highly successful: all 21 turned out to be pre-ELMs.

"100 percent of the candidates were these pre-ELMs we'd been looking for", says Kareem El-Badry. "They were more puffed up and bloated than ELMs. They also were egg-shaped because the gravitational pull of the other star distorts their spherical shape."

"We found the evolutionary link between two classes of binary stars - cataclysmic variables and ELM white dwarfs - and we found a decent number of them", El-Badry adds.

From the follow-up spectra, 13 of the stars showed signs that they were still losing mass to their companion. The other eight seemed no longer to be losing mass. El-Badry plans to continue studying the pre-ELM white dwarfs and may follow-up on the 29 other candidates he previously discovered. 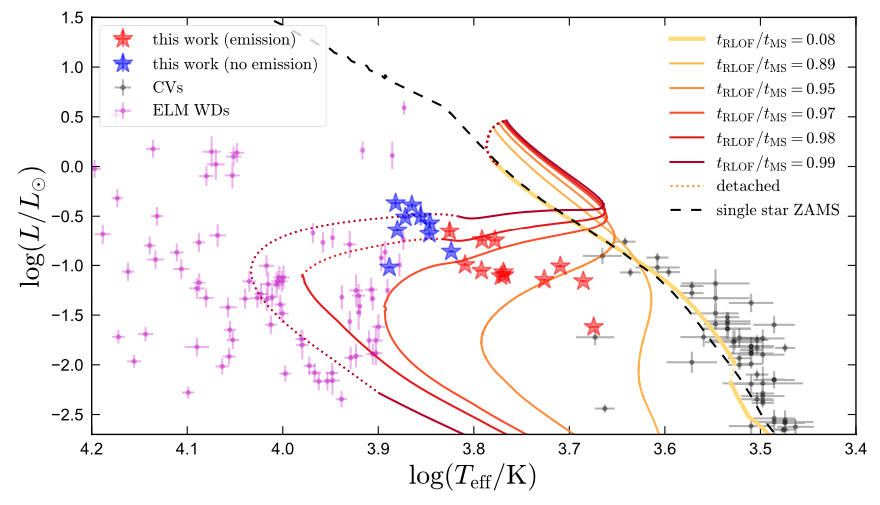 Figure 2: HR diagram with the 21 pre-ELMs identified (indicated with the stars), some of which without emission lines (so likely detached) and some of which with emission lines (and likely still transferring mass). These are transitional between Cataclysmic Variable donors and ELM WDs. As a reference, a sample of Cataclysmic Variables is given (black crosses) and a sample of ELM WDs is given (pink crosses), both taken from literature. Credit: Kareem El-Badry, et al. 2021 MNRAS.

This is just one of the many amazing results coming out from Gaia's Early Data Release 3. The scientific community waits in anticipation for the first release of binary stars from Gaia in Gaia Data Release 3, which promises to bring a few 100,000 non-single stars and is a potential treasure chest for astronomers.